Seoul: “Personages” by Louise Bourgeois at Kukje Gallery through June 29, 2012 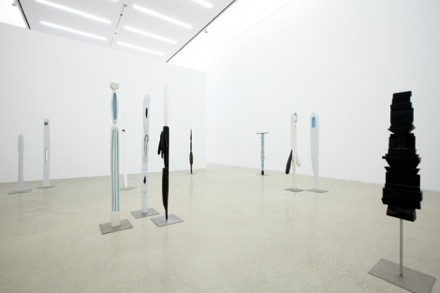 The Kukje Gallery in Seoul is currently the host of 14 works from “Personages,” Louis Bourgeois’ early sculptural series created in the 1940s and 1950’s. Also on view is the installation “Peaux De Lapins, Chiffons Ferrailles Vendre,” from her “Cells” series, created much later in her career in 2006. By showing these two installations alongside each other, the exhibition aims to create connections between biographical themes and architectural sensibilities that permeate Bourgeois’ work over an extensive career manifested in distinctively different forms. 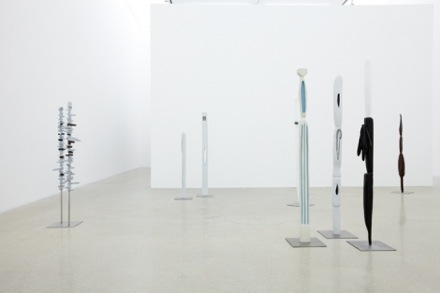 The “Personages” are sculptural embodiments of individuals that Bourgeois left behind when she moved from her native Paris to New York. Each life sized abstraction represents a person, and careful sculptural details bring out individual character in each. Bourgeois has described these as “manifestations of homesickness,” each work helping her cope with what she left behind in Paris, while also performing as abstract surrogates. 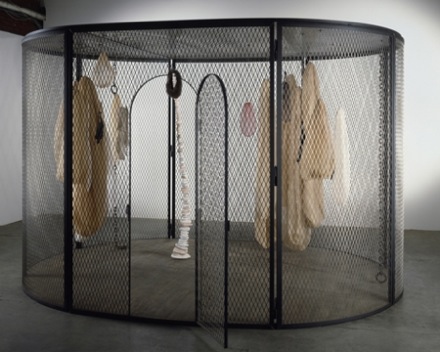 Originally sculpted out of wood, the works were over the years cast in bronze, but painted carefully with texture to disguise the medium. The sculptures could not stand on their own, reflecting the fragility of Bourgeois’ psychological state at that time, with immobilizing anxieties as a new wife and a young artist. When the sculptures were first exhibited in 1949, Bourgeois drilled into the floor and inserted works to look as if they were nailed into the ground, as an environmental installation. The sculptures are now held up by steel plates. 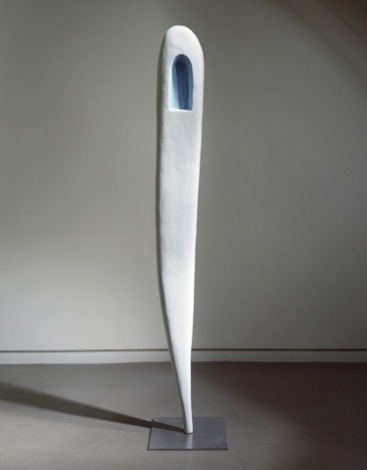 Early “Personages” works are simple, top heavy forms carved from a single piece of wood. Physical rigidity derived from her fears and anxieties during the time attribute to the stiff forms of the early sculptures. A shift in her psyche, a release of tensions, led to an evolution in form. Later works are more structurally complex, looser, and are articulated by repetitive shapes. In both manifestations, the sculptures have striking bodily presence. Their sense of lifelike existence is highlighted by their presentation in the gallery space, the hauntingly anthropomorphic abstractions are arranged in clusters, resembling people mingling at a social event. 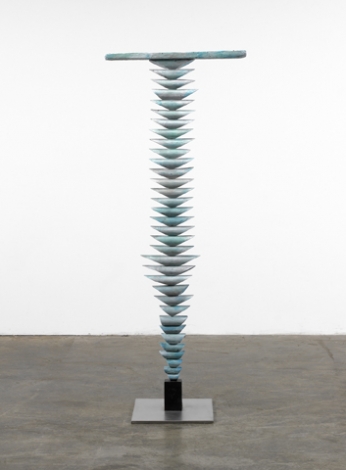 Narrow and upright, the sculptures are also reminiscent of totem poles. Bourgois was interested in surrealism at the time and formal similarities can be found between the “Personages” and Alberto Giacometti’s sculptures, who, in the surrealists tradition, found inspiration in primitive objects. 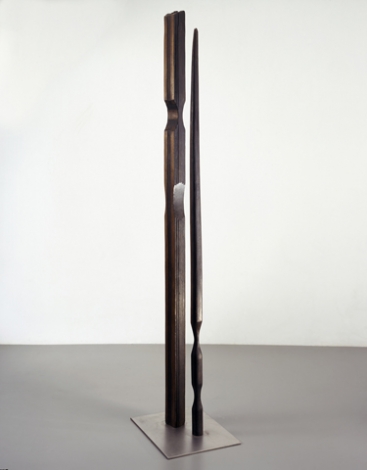 “Peaux de Lapins, Chiffons Ferrailles À Vendre,” an the installation from her “Cells” series created decades later is a continuation of Bourgeois’ practice of working though biographical and psychological experiences in her art. The title refers to a peddlar’s song remembered from childhood. Her exploration of the the bodily appears here within the round steel cage, where flesh colored forms hang, resembling soft and sexually ambiguous body parts. Accompanying the unsettling bodily forms in the cage hang chains, furs and found objects. Though the two doors stand ajar, there is a heavy feeling of claustrophobia and entrapment dominating the sense of nostalgia and lyricism that the work evokes. The show runs through June 29, 2012

This entry was posted on Tuesday, June 26th, 2012 at 12:57 am and is filed under Art News. You can follow any responses to this entry through the RSS 2.0 feed. You can leave a response, or trackback from your own site.