January 24th, 2022
REFERENCE LIBRARY
Home » Art Observed Interview with Dan Colen on ‘Out of the Blue, Into the Black’ at Gagosian Paris through July 28, 2012

Art Observed Interview with Dan Colen on ‘Out of the Blue, Into the Black’ at Gagosian Paris through July 28, 2012 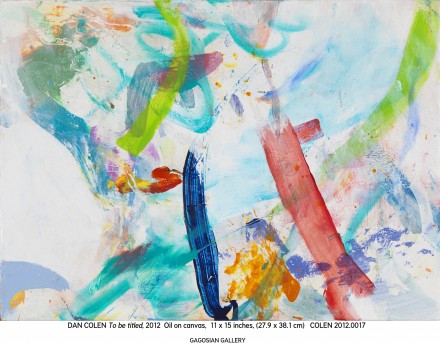 In his most recent show at Gagosian Gallery in Paris, Out of the Blue, Into the Black, New York based artist Dan Colen  is the second part of a show in memory of his close friend Dash Snow. Out of the Blue, Into the Black continues where Come Out Come Out Wherever You Are (2009) left off, and is comprised of  paintings, installation, and a sculpture. Art Observed’s Jonathan Beer was able to catch up with the artist bef0re the show’s  opening on June 10.

Art Observed: You have a show coming up at the Gagosian space in Paris, Out of the Blue, Into the Black, which is the second part of Come Out Come Out Wherever You Are!, which you dedicated to your friend Dash Snow. The show takes its title from a combination of two of Neil Young’s songs from the 79’ album Rust Never Sleeps, correct? Does this album have special significance for you? Or does Neil Young?

Dan Colen: Well, it’s a great album made by a great musician.  The show itself is pretty minimal. There is a sculpture made up of derelict blue bicycles I have been cutting loose from the city streets. And then I’ve been working towards tarring and feathering a whole room of the exhibition space. Both of these component works are a tribute to my friend Dash Snow, who died in 2009. I had been listening to a lot of country music and blues and starting noticing all these abandoned blue bikes around the city.  I starting think of each one as a different song, a different shade of blue: dollar bill blues, big mouth blues, cocaine blues, etc. I started thinking of the sculpture as “My Old Friend the Blues”, a title I took from a Steve Earle song. Dennis Hopper’s film “Out of the Blue” is a favorite of mine, too – I actually used its title for my candle painting book. Neil Young’s song “My My, Hey Hey (Into the Black)” is an important part of the movie.

Anyway, at some point a few months ago it occurred to me that the experience of walking through the show would literally be “out of the blue,” where you are in a space alone with all the blue bicycles, and then you walk into the next room, “into the black,” where you are completely surrounded by the tar and feathers. From there I remembered that Kurt Cobain had used Neil Young’s lyrics (again from this same song/album), “it’s better to burn out than to fade away” for his suicide note. The combination of the content of the song, the movie, and Kurt Cobain’s death all seemed so poignant and relevant given that I started working on this show as a eulogy of sorts for Dash. 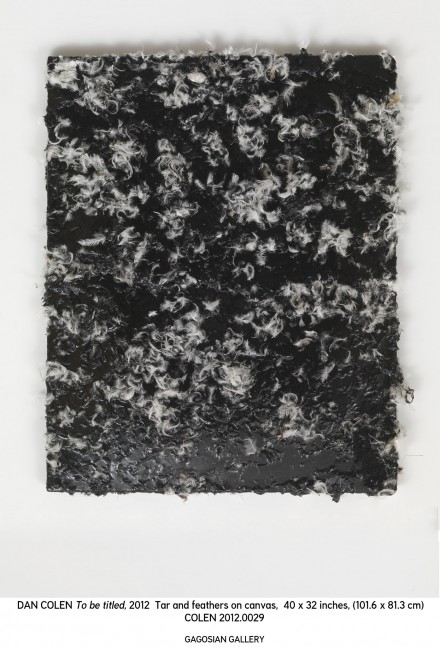 AO: The show juxtaposes two materials you’ve developed an extensive relationship with: confetti and tar and feathers. Both materials are culturally charged: the confetti carries a context of light heartedness and celebration. The tar and feathers are associated with punishment, both physical and emotional: tar and feathering was done in public and by extension for the public. (Both in legal terms and for entertainment). Does this play a part in your choice to use them?

DC: Most of the ideas I decide to spend time with in my work develop pretty organically and without a clear understanding of exactly why I’ve decided to push through with any particular thing in a more intensive way than another thing. But the confetti paintings were a direct response to Dash’s death.  I had the thought of them prior, but losing him pushed me through or somehow gave me the conviction to make that work. And although at the outset confetti is associated with celebration and joy, for me the paintings have an unavoidable melancholy that runs next to that hopefulness.  The tar and feather was actually an idea of Dash’s that he had had after we had done the Nest together. It had always excited me, and since he never had the opportunity to realize it, I decided I would make tar and feather paintings as a tribute to him. The material immediately made sense to me. It had a connection to a lot of my work, especially my gum paintings and birdshit paintings. It was also immediately obvious that there was a great tension but also a great sympathy shared between my confetti paintings and these tar and feather works. Both bodies of work are about a slippage. The confetti paintings have always been about loss. They are about the pointless struggle of trying to hold onto or freeze a moment in time. But they are also a monument to every moment lived trying to celebrate. They somehow embrace nostalgia while exposing the ridiculousness of it.  Similarly, while the tar and feather paintings are about a darkness and a pain, the experience of standing in front of one is about acknowledging the beauty or the glory that is only found at the end of the deepest, darkest black hole. 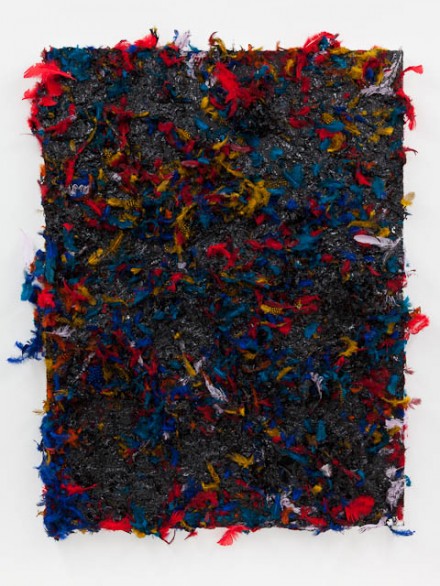 AO: The tromp l’oeil aspect of the confetti paintings gets at an overarching theme that was part of the primary show, Come Out Come Out Wherever You Are!, which was absence. The show was dedicated to Dash Snow, who passed away in 2009. The show seemed to reveal a lot about your history and its relation to your materials. Whether it was giving away copies of Abbie Hoffman’s Steal This Book (of which you bought every copy in the US) or creating works that were devoid of color the ideas of absence and abandonment came through. Was it your intention to carry that over into this upcoming show?

DC: Definitely. Both shows are about Dash’s absence in my life  – or maybe more accurately they are both part of a bigger mission in my life that has to do with trying to fill the void left by his loss. Steal This Book, Nobody for President, Disappearing Act, My Old Friend the Blues and, probably most of all, the experience of standing in the tarred and feathered room are all about feeling an absence. 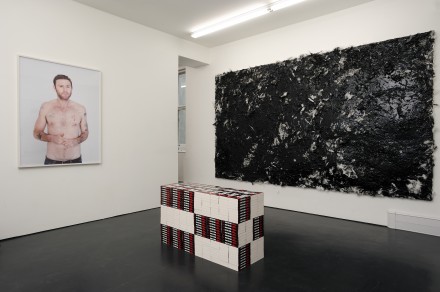 AO: Come Out Come Out Wherever You Are! had a much more manic feel in comparison to the work in of the Blue, Into the Black, do you feel that you’re accessing ideas of absence differently now?

DC: That’s actually a pretty interesting observation. I hadn’t tuned into that yet, but you’re right. This show has a much quieter feel to it.  The two distinct gallery spaces have a lot to do with the different feel to the shows. But I’m definitely in a much different head space now than I was a little over a year ago when I did “Come Out Come Out Wherever You Are.” I’m much more at peace with my circumstances. At least many of the ones at play in both these shows. 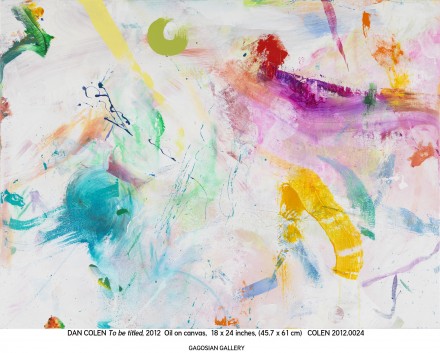 AO: What else are you working on? What other themes can we expect to see you unpack in the near future?

DC: I’m working on a bunch of stuff now. I’m about done with the construction of a sculpture studio in the Hudson Valley, so I’m excited to get to work in there. And this year for the first time I will be organizing full-scale shows with my flower paintings, stud paintings and grass and dirt paintings.

This entry was posted on Monday, July 9th, 2012 at 12:42 am and is filed under Art News, Interview. You can follow any responses to this entry through the RSS 2.0 feed. You can leave a response, or trackback from your own site.