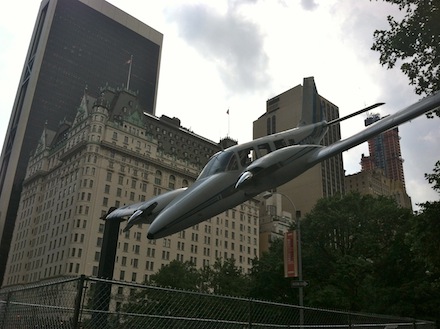 All photographs taken by Zoe Zabor for Art Observed

Situated on the active corner of Fifth Avenue and 60th Street, Paola Pivi‘s new installation of a 1977 Piper Seneca opened on June 20th, surprising onlookers with its unusual presence. The six-seater plane is to continuously rotate 360-degrees on its axis until August 26 in the Doris C. Freedman Plaza. Pivi’s “How I Roll” is the latest project of the Public Art Fund, an organization focused on facilitating public art projects in New York City since 1977. 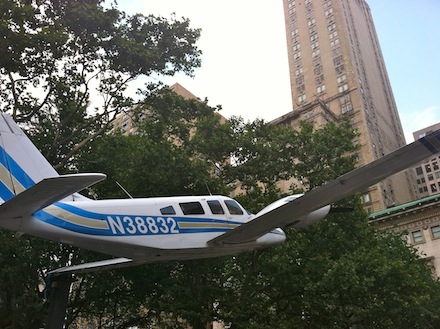 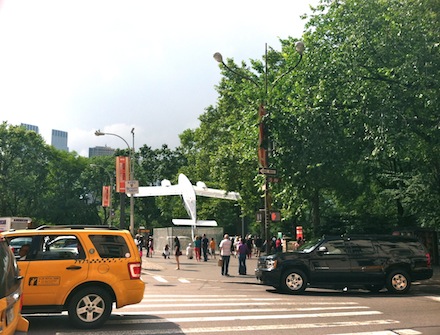 Held up by two vertical steel poles in the Southeast corner of Central Park, the plane makes a distinct contrast against its two-sided backdrop of trees and buildings. Paola Pivi is known for creating surprises in the space she transforms. “How I Roll”‘s location in the middle of a walkway is very uncommon for regular onlookers to the scene. 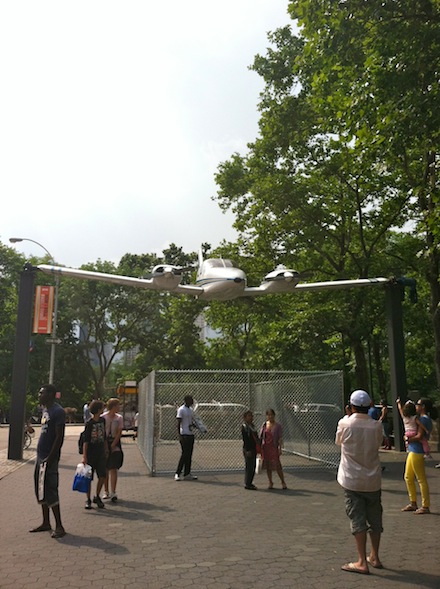 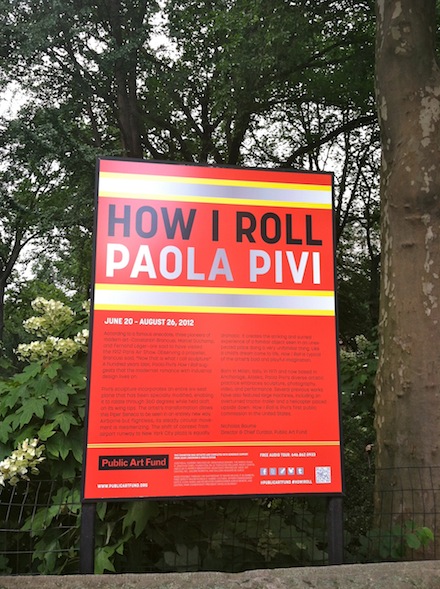 A master of creating the unexpected in an everyday setting, Pivi has previously converted an art museum into an confinement of screaming people and has positioned a depiction of two zebras on a snow-covered mountaintop (NYC Arts), in order to challenge the reality and functionally of a specific space. By redefining what a space can hold and where an object can be located, the artist’s work reexamines the relationship between art and its environment. “How I Roll” is Pivi’s first public art project in the United States. 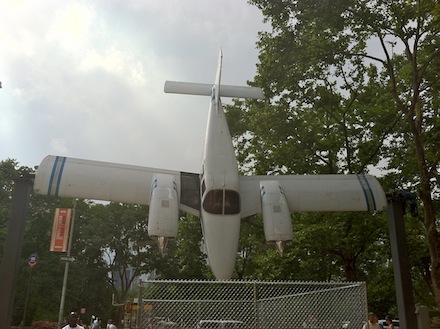 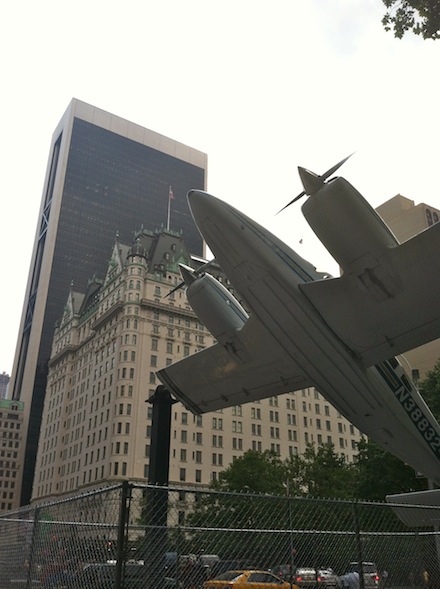 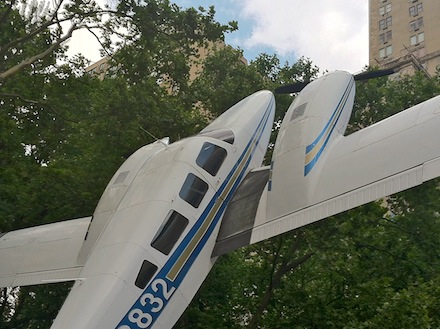 “How I Roll” is an installation from Ms. Pivi’s series involving industrial machines. By placing an object in an uncommon environment, viewers are challenged to imagine the means in which the object redefines its new location and how the object serves a function outside of its ordinary habitat. 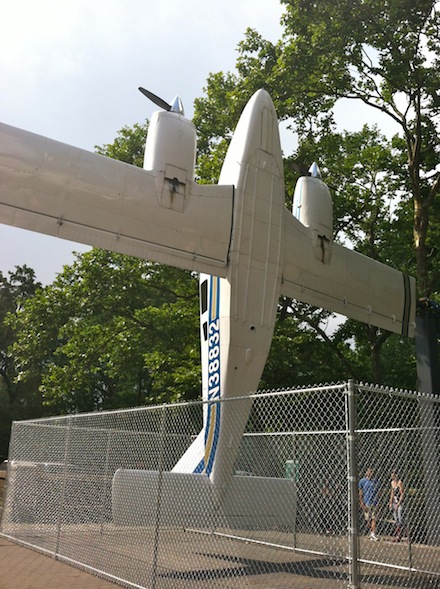 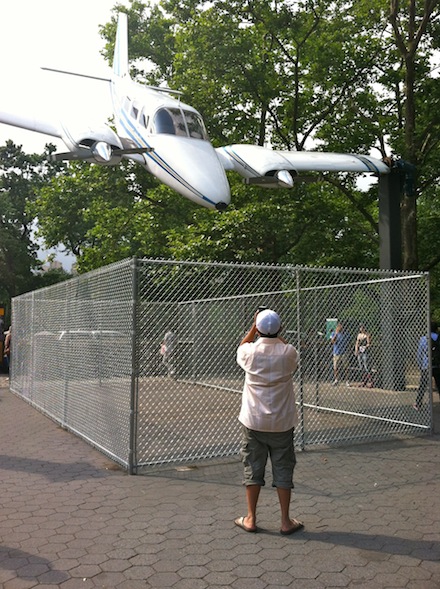 Nicholas Baume, director of the Public Art Fund, recalls the birth of modernism in relation to this new installation: “Constantin Brancusi, Marcel Duchamp, and Fernand Léger are said to have visited the 1912 Paris Air Show together… Upon observing a propeller, Brancusi exclaimed, ‘Now that is what I call sculpture!’ Paola’s work suggests that this love affair between modernist artists and industrial design is still able to generate remarkable visual poetry” (DNA Info). Perhaps this connection between art and industry aids in redefining the plane’s presence in the crowded urban arena. The scene seems almost imagined as the plane is in air, but fixed in a slow, controlled circulation. 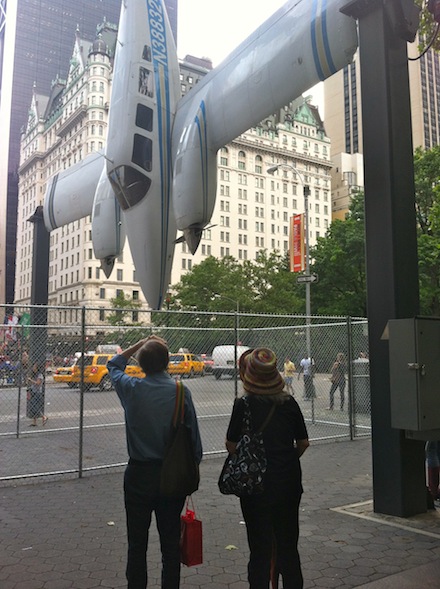 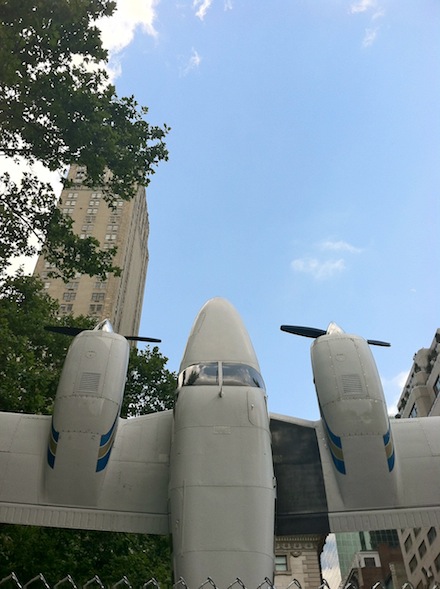 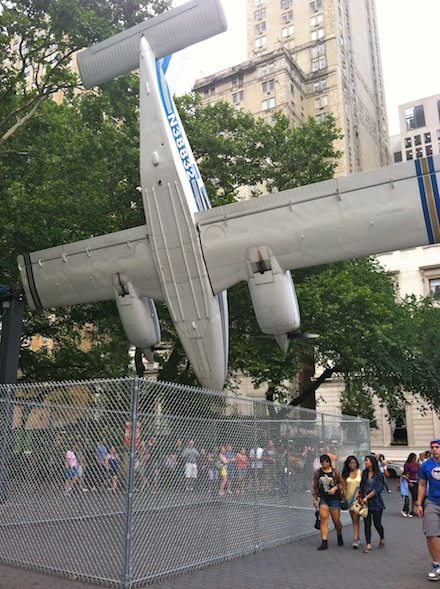 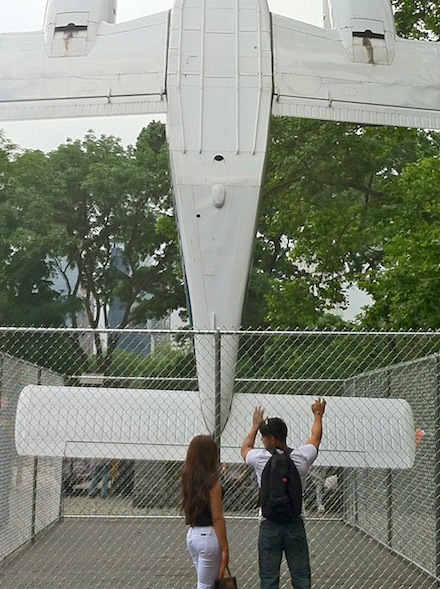 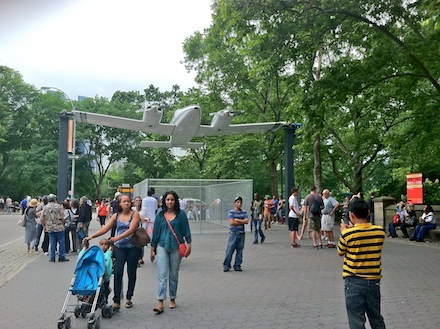 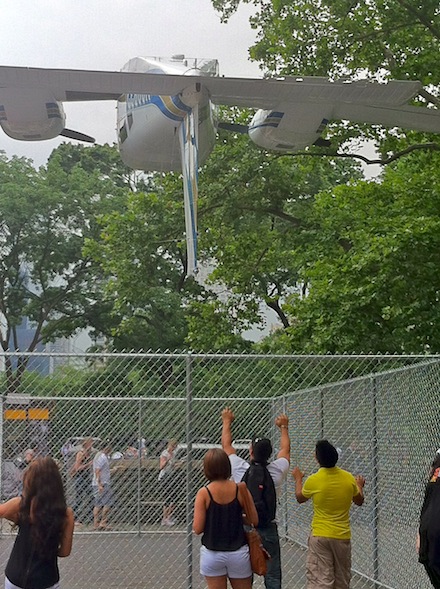 Born in 1971, Paola Pivi now resides and works in Anchorage, Alaska. Her art has been featured in multiple continents, including Europe, Asia, North America, and Australia. She was honored with the Golden Lion Award during the 1999 Venice Biennale.

This entry was posted on Monday, July 2nd, 2012 at 1:41 am and is filed under AO On Site. You can follow any responses to this entry through the RSS 2.0 feed. You can leave a response, or trackback from your own site.