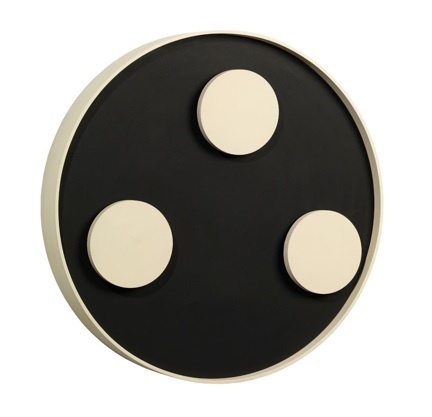 This July, the Sperone Westwater gallery presents Moving Spirits, an exhibition of the kinetic works of Francois Morellet (France) and Gerhard von Graevenitz (Germany). The longtime collaborators are featured here through works dated between 1960 and 1976, the period coinciding with the artists’ involvement with the Light-Kinetic Movement. 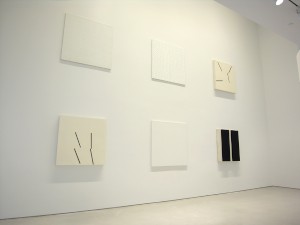 Drawing on the traditions of Piet Mondrian and working in conjunction with Europe’s Nouveau Realistes, the Light-Kinetic works utilize “a systematic and simplistic language of geometric shapes.” The pieces are defined by their arresting quality, canvases transformed into hypnotic meditations: von Graevenitz’s Vier exzentrische Streifen, je zwei synchron and Zwei Rechteckige Blocke auf Weiss are both kinetic and interactive – their movements are unprovoked, random oscillations of a pattern that leaves the viewer transfixed, soothed or frustrated by the unpredictable movements of von Graevenitz’s creations. His plaster reliefs are minimalist meditations that are best exemplified by the uncluttered canvas, the surface disturbed only slightly by the deliberate movements. When the rods become the focal point of a piece rather than its complement, however, as on the exhibition’s second floor, the piece becomes congested, turning the lazy rotations into a squirming mass of metallic sticks. 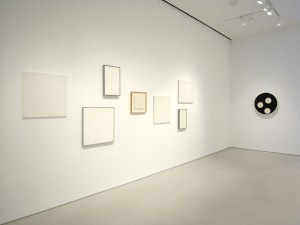 Morellet’s canvases, in turn, are geared towards the optical illusion rather than patient observation. They are static from afar but affect a vertiginous pulse when viewed in close-up – his crosses, bumps, and dimples fill the plaster canvases like so many landscapes, interrupting the orderly appearance with a chaos brought on by its overwhelming repetition. 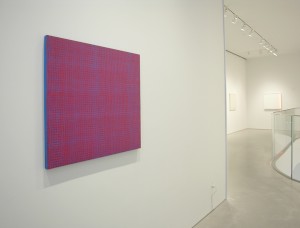 The artists have shared many spaces in their decades of collaboration, but perhaps none so solemnly cosmic. The walls, white from ceiling to floor, situate Moving Spirits within a space-age modernism worthy of its contents. As the exhibition moves up, as monochromatic context shifts from reverence to detachment.  As a physical experience, however, Moving Spirits is unique in its ability to capture and hold the viewer’s gaze, the kinetic force of the pieces moving from reaction to perception. The pairing of these two old friends is an example of why they worked so well together, one artist playing off the other to achieve truly visceral results.

This entry was posted on Sunday, July 8th, 2012 at 4:45 pm and is filed under Art News. You can follow any responses to this entry through the RSS 2.0 feed. You can leave a response, or trackback from your own site.