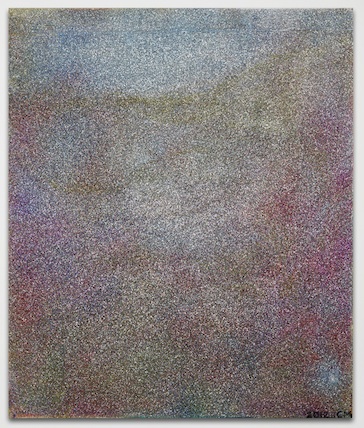 The Journal Gallery has organized a summer group show whose impact exceeds the expectations of such a reference. Home Again, Again features nine distinctive contemporary works which, crowded together in the tiny Williamsburg space, form another, unique whole. In a lovingly critical homage to art after 1950 – from the Greenbergian picture plane to the strigency of minimalism – the works on view here are flat, angular, and imposing. Yet, their initial starkness is deliberately thwarted by their use of material and content, offering a lively contemporary perspective on the legacy of postwar American art.

Both beauty and irony abound in the show. Sam Moyer’s large, flat charcoal-black canvas is traversed by trompe l’oeil creases reminiscent of Tauba Auerbach. Alluding to both the night sky and the crevices in concrete, this work appears to comprise the macro and the micro of the universe. A similar sense of the infinite can be found in Chris Martin’s adjacent glitter spectacle. The elder statesman of the group – the rest of the artists are young and in different stages of emerging – Martin’s allover composition is rendered in varying hues of purple and green glitter, simple and sublime. 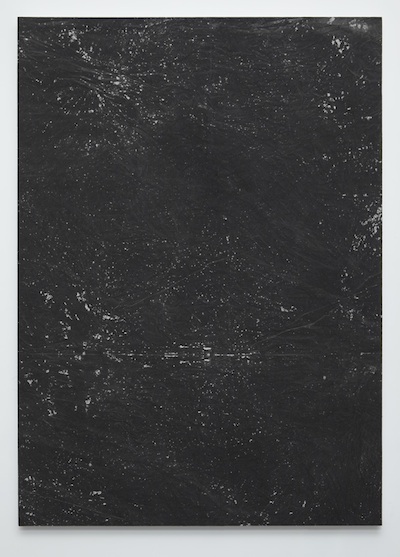 Darren Bader’s wall sculpture, Lack, injects the show with some ironic comedy. The work is comprised of three shiny black slabs of Ikea’s popular shelving unit, which bear a striking and deliberate resemblance to Donald Judd’s celebrated wall-box units. Bader, however, offers a Duchampian twist by placing random objects on each shelf. During the opening, a carton of coconut water, an onion, and small white ceramic jug were on view. 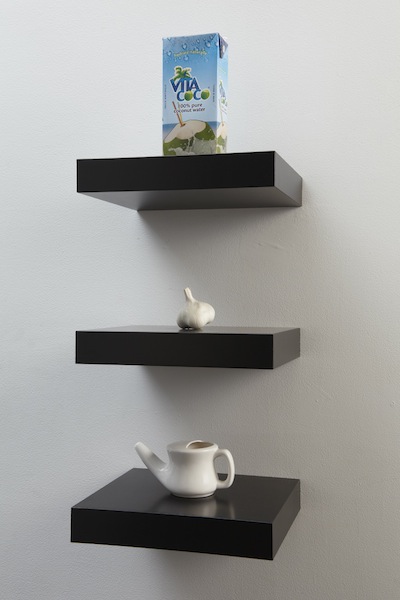 Channeling Jasper Johns, Ned Vena’s large target, eight feet in diameter, overwhelms the tiny exhibition space. The work becomes aggressive and threatening, which only adds to its power. Indeed, all of the works in the show benefit from their close-knit grouping. Rather than existing autonomously, the works appear to “live” together in the storefront gallery. They become ominous and forceful, and the gallery becomes an environment for the viewer to enter. The parts work, but it’s the sum that succeeds. 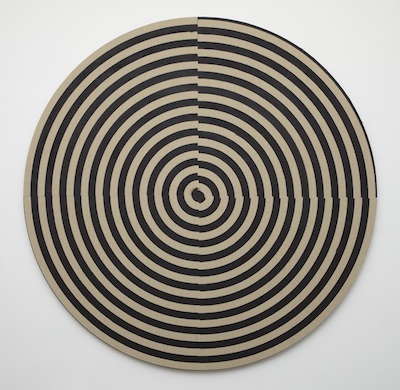 Home Again, Again is on view through August 3, 2012. The Journal Gallery is located at 168 North 1st Street in Williamsburg.

This entry was posted on Tuesday, July 10th, 2012 at 11:34 pm and is filed under AO On Site, Art News. You can follow any responses to this entry through the RSS 2.0 feed. You can leave a response, or trackback from your own site.