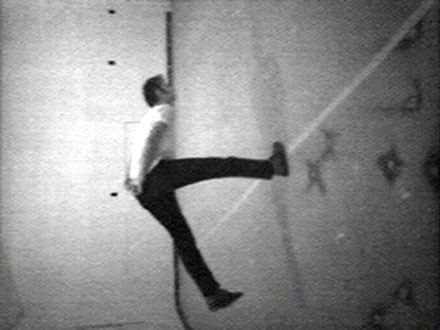 Bruce Nauman, Slow Angle Walk (Beckett Walk) (1968). Video (Black and White, Sound) Duration: 60 Minutes Copyright ARS, NY and DACS, London 2012. Courtesy Electronic Arts Intermix, New York
.
An exhibition of Bruce Nauman’s films made between 1967 and 1969 is on view at London’s White Cube Gallery through July 8. The films of this period use the artist as his own subject. They are characterized by Nauman’s experimentation with his own body through motion, gesture, balance, and interaction with objects or musical instruments.
Nauman kept two studios in California after graduating from UC Davis in 1966. At these two locations (the Mission district of San Francisco and Mill Valley, respectively), he recorded several defined actions in real time on a stationary camera. Nauman considered these films an honest document of on-going work—a veritable sketchbook for his physical portfolio. Featured in the White Cube exhibition are works such as Bouncing two balls Between the Floor and Ceiling with Changing Rhythms (1967-68), Playing a Note on the Violin while I Walk Around the Studio (1967-68), and Walking in an Exaggerated Manner Around the Perimeter of a Square (1967-68). The actions of each film reflect their title, essentially allowing Nauman to build a physical vernacular through repeated experimentation. 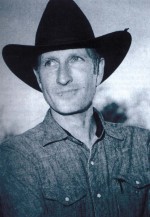 Whereas Nauman’s earliest films were resrticted by the ten minute running time of his 16mm film format, he was able to make longer films after his dealer, Leo Castelli gifted him a portable video camera after Nauman’s move to New York City in the late 1960s. With the expanded running time, came the secondary element of physical exhaustion. Nauman’s exercises had become more intense and could be performed for up to an hour, as seen in Stamping in the Studio (1968).

Nauman’s films of this period use the elegance of his motions to counteract their unexpected documentation and seeming lack of necessity. Their repetition and uncertain narrative have a hypnotic quality, begging for a resolution of the enigmatic exercises. These works question the limits of art, and the role of the artist, and move film into conceptual modes while also testing the physical limits of our human condition.

This entry was posted on Sunday, July 1st, 2012 at 6:51 pm and is filed under Art News. You can follow any responses to this entry through the RSS 2.0 feed. You can leave a response, or trackback from your own site.