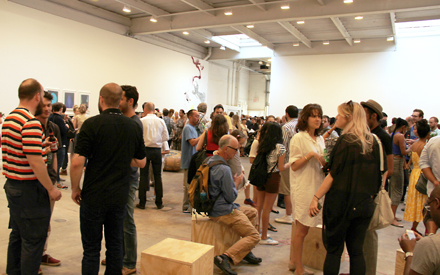 Crowd Shot at the opening of People Who Work Here at David Zwirner. All photos by Aubrey Roemer for Art Observed. 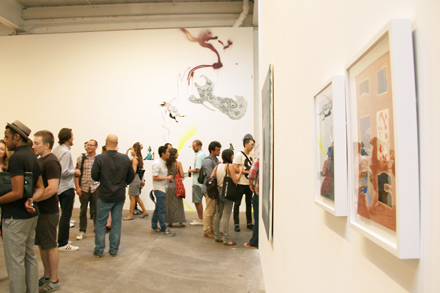 Installation view of the opening

There are 16 artists exhibiting in People Who Work Here, and the range of the work covers all forms of media. There are paintings, sculptures, videos, installations – and most of the artwork rests in the crux of several disciplines. Dave Miko’s wall drawing / installtion is one such example. Comprised of 16 small abstract oil paintings on organically shaped aluminum pieces, they are installed in the manner of a Chinese brush painting scaling the wall. The wall is also painted in sparse, energetic, and chromatic gestures. Not quite a painting, not quite a sculpture, nor an installation – this work who’s individual pieces are titled whimsical names like Zooplankton, Garden Gnome, and Tortoise Death Mask transcends any specific media. 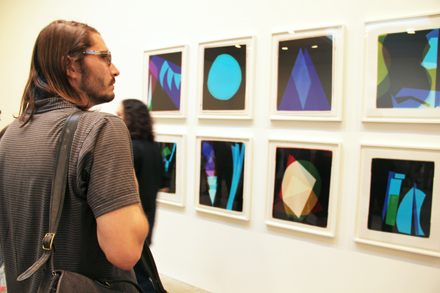 Liz Neilsen’s installation of eight framed C-prints, whose Day-Glo colors pop against dark backgrounds, are like abstract paintings rendered in a digital age. Their titles pay homage to formalistic searching – all are named Composition 1- 8. The works colorful and mostly geometric shapes seem influenced by Ellsworth Kelly and Malevich – yet they are playful and spontaneous like a visualization of improvisational music. 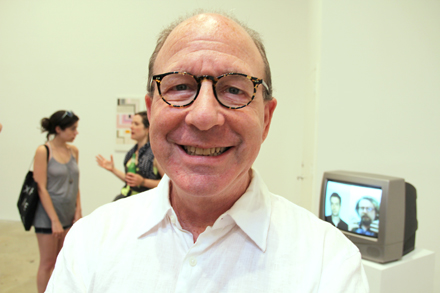 Jerry Saltz at the opening.

Following in abstract suit, is Ramon Silva’s painting / video installation Pyramid Stack #1. As the title suggests, the piece is comprised of a tower of 21 red, white, and blue optical pattern paintings. Situated at the base of the pyramid is a flat screen resting on the ground looping a video of these patterns dancing around. Chris Medina’s real research technology compliments the abstract painting theme. It’s vivid red background carves out a painterly green shape that likens itself to foliage. Similar to Nielson’s work, it is an inkjet transfer on canvas, but incorporates oil, wax, and acrylic paint. 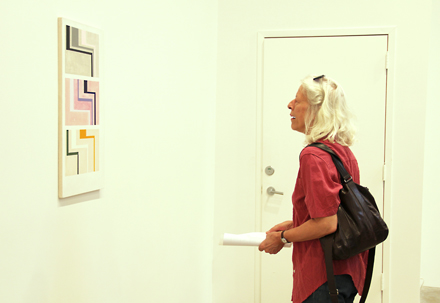 Pursuant to issues with the abstract are Sam Martineau’s sparse paintings that have a decidedly Nordic sensibility to them, and Ben Berlow’s painterly shapes floating in washy fields on paper. Justin Davis Anderson is also making abstract paintings, but on Polaroids with obstructing color blocks of gouache. Boarding on abstraction, Brent Harada’s psychedelic black and white ink drawings with correction fluid bring the conversation towards representation.

There two representational painters in this show. Cy Amundson painting, Thoughts on Proximity (Moon Dog), is a playful riff on painting being a window to another world, by literally having the subject gaze out the window into late dusk. The subject is also a personified dog drinking a glass of wine, reminiscent of a contemporary Magritte. Exhibiting six very small and highly rendered oil paintings is David Ording, whose work is replete with historical referencing portraiture. 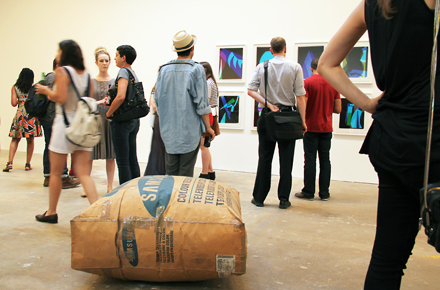 Clive Murphy’s Inflatable Cardboard Box (You’ve Got It All), and Liz Nielsen’s Composition 1- 8 in the background. 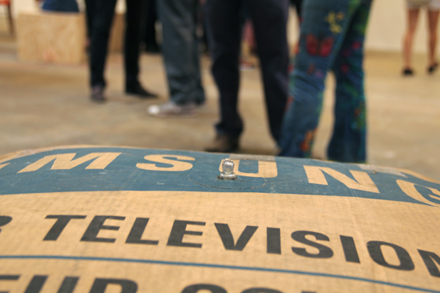 Detail of Clive Murphy’s Inflatable Cardboard Box (You’ve Got It All), (2004)

Breaking from the two-dimensional are Clive Murphy’s sculptures. Notably, his inflated Samsung TV screen cardboard box, which is sardonically titled Inflatable Cardboard Box (You’ve Got It All). Also, his harp-like, sporty, dream-catcher sculpture - Untitled (Calatrava Jaws) – is constructed of clothes hangers and synthetic cord. Additionally, Aidan Sofia Earle has a small sculpture on display – a delicate and whimsical metal sculpture. 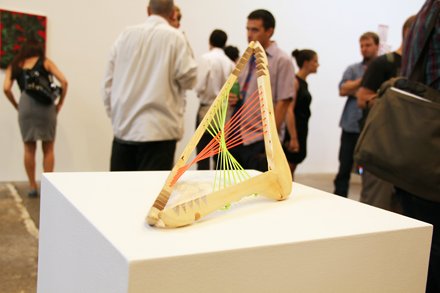 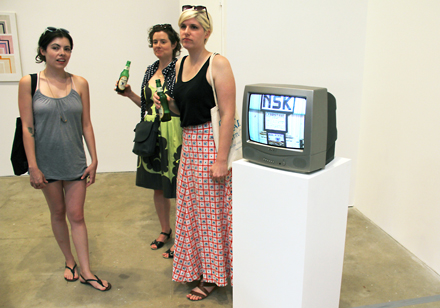 John Holten and Aengus Woods, The Appearence of a Conversation About the LGB Group in the David Zwirner Gallery Inventory (2012)

There are two additional video pieces  – one by Justin Phillipson and the other collaboration by Aengus Woods with John Holten. Phillipson’s Two Bodegas, Brooklyn is a representational of a nighttime urban landscape. Whereas Woods and Holten’s video focuses on an Eastern European avant-garde art collective. Although not a video, Josh Brown’s cinematic installation of seven digital prints featuring the car-racing world mimic film stills. 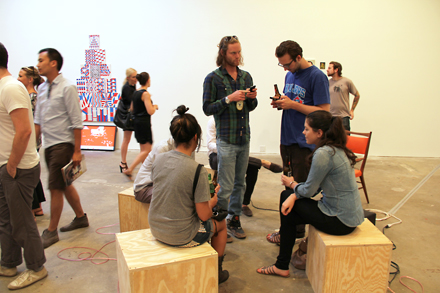 Lastly, there is an installation by Joel Fennell that works as lounge for visitors. Comprised of speaker boxes you can sit on, a Mid-century chair, and complete with an iPod shuffle – it was occupied throughout the duration of the opening.

This entry was posted on Friday, August 10th, 2012 at 12:44 am and is filed under AO On Site, Art News, Galleries, Go See. You can follow any responses to this entry through the RSS 2.0 feed. You can leave a response, or trackback from your own site.