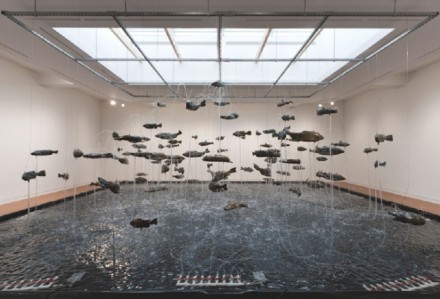 Bruce Nauman’s body of work has long incorporated elements of identity, the potentials of art and the artist, and an interplay between himself and the viewer. These aspects converge in his One Hundred Fish Fountain (2005), on view at Gagosian’s Madison Avenue headquarters.

The 25 by 28 foot fountain, comprised of 97 hollow bronze fish, nearly fills an entire room, and in places reaches heights of 10 feet. The fountain is a maze of wires, tubes, and streams of water; the fish suspended deftly from a grid on the ceiling.  Water is pumped through the tubes, and spurted at random through holes in the fish, creating an organic and imperfect flow reminiscent of an actual waterfall. Set on a cycle, the water runs for 15 minutes, and then shuts down for two. As the water wanes to a trickle, the streams become more and more irregular, and finally stop, before the loop begins again. 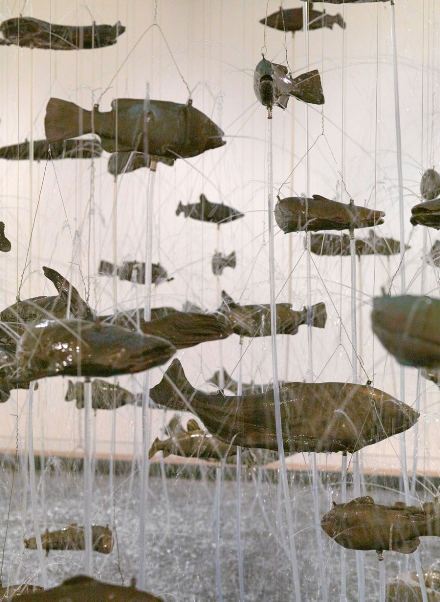 The impression is at once staggering and meditative. Nauman creates a work that is environmental, enveloping the viewer in a 360 degree experience and engaging them on multiple sensory levels. The fountain almost outgrowing the room, Nauman employs a signature method, leaving only a small , narrow track, or corridor, from which to view the work, making the experience that much more visceral and provoking. Through its cyclical rhythm, One Hundred Fish Fountain also invites the viewer to reflect on its many states, suggesting the tension between life and death, concealment and revelation, and perception versus reality.

The fish that comprise all 97 bronzes- catfish, bass, and whitefish, among others- are the kinds that Nauman had caught fishing in the Great Lakes, with his friend, the late dealer, Donald Young. And though not an overt reference, Nauman admits that the work was influenced by his memories of boyhood fishing with his father, even more firmly tethering the fountain to the theme of selfhood evident in much of his ouevre. With apparent streaks of himself running through the work, Nauman’s One Hundred Fish Fountain plays with the idea of participation and the relationship between artist, artwork, and viewer.

This entry was posted on Friday, August 17th, 2012 at 8:09 am and is filed under Art News. You can follow any responses to this entry through the RSS 2.0 feed. You can leave a response, or trackback from your own site.