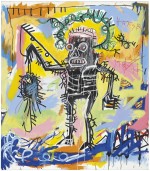 A 1981 Jean-Michel Basquiat painting is expected to set a record for the artist’s work at the Christie’s New York auction on Nov. 14th. The privately-held painting of a fisherman with his catch has been exhibited in every major retrospective. The work will be publicly exhibited in London, Paris and New York prior to the sale. Although the presale estimate is $20 million, Christie’s expects the final price to exceed that due to a strong market for Basquiat.

Read the full article via The Independent

This entry was posted on Wednesday, September 19th, 2012 at 10:39 am and is filed under Art News. You can follow any responses to this entry through the RSS 2.0 feed. You can leave a response, or trackback from your own site.