LA-based artist Eric Yahnker’s first solo exhibition in New York City, entitled Virgin Birth ‘n’ Turf, opened earlier this month at The Hole.  An irreverent and and visceral exploration of the current socio-political climate, Virgin Birth ‘n’ Turf “provides a mad lab where “I get to swab the inner-cheek and place under a microscope a petri dish of the contemporary American experience in the shadow of another blisteringly contentious Presidential election, analyzing the gray matter and microorganisms which make us tick as well as the flesh-eating bacteria which plague us.”, according to the artist.

Working across a variety of media, Yahnker is a skilled draftsman who moves comfortably through the realm of sculpture and installation.  The artist has spent two years preparing for this show, which is a culmination of his cultural observations and scathing sense of Pop humor. Featuring over thirty new works, including large-scale drawings, small objects and room-size installations, the exhibition presents Yahnker’s strong visual language and lyrical sense of comedy. 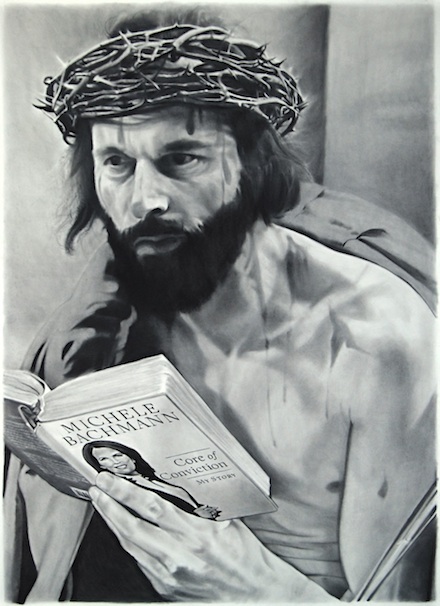 An example of Yahnker’s political sense humor is Selected Reading (Core of Conviction) (2012), which depicts Jesus reading Michelle Bachman’s titular memoir. Jesus is carefully rendered in a spectrum of charcoal shadows, looking up from the book and contemplating the words he has just read. In contrast, Bachmann’s book is drawn in a hyper-realistic manner, setting up an aesthetic disjunction that subtly affects the work’s overall impact. Yahnker’s mark-making abilities evident, and call to mind the finesse of charcoal masters such as Robert Longo. 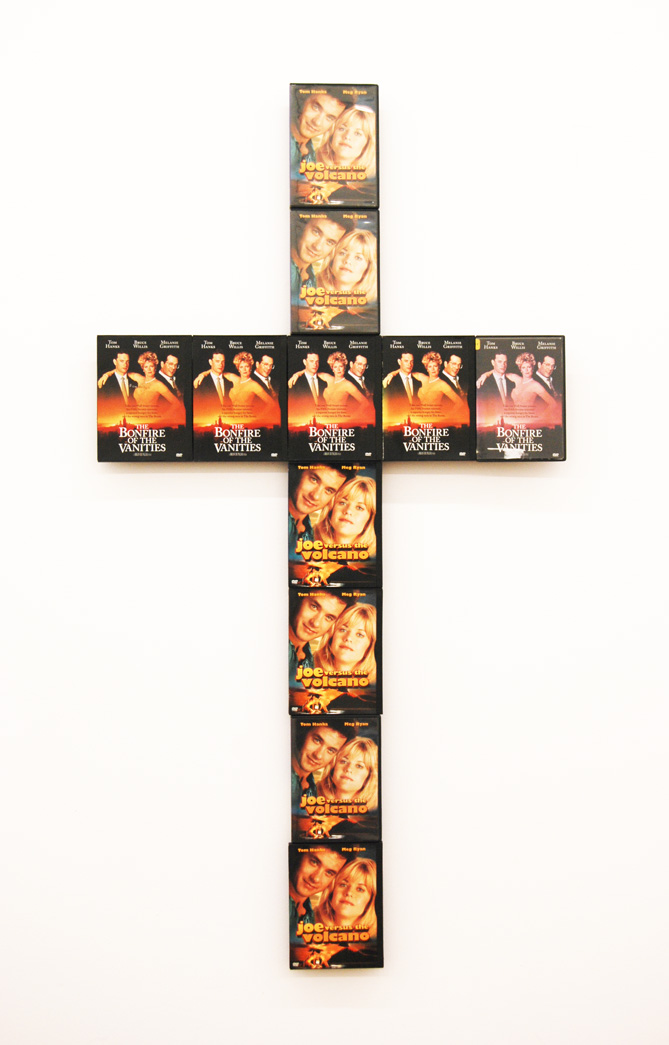 Yahnker plays with religion elsewhere in the exhibition, particularly in works such as Cross Section #2 (Joe vs. the Vanities) (2012), featuring DVDs of mainstream eighties movies blasphemously mounted to the wall in the shape of a cross. 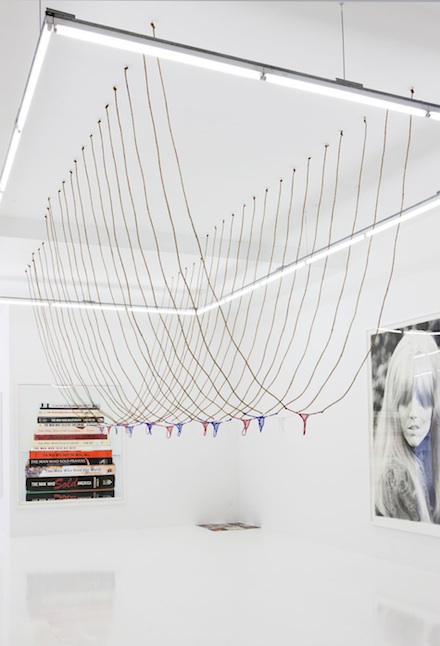 The artist’s vision is not limited to singular pieces, for the show additionally encompasses room-sized sculptural installations. The show also includes large installations. G-String Theory, in which Yahnker has suspended arcs of rope and fishnet thong panties from the ceiling  are perhaps a droll nod to the meat rope sculptures of Paul Thek, as well as to the hyper-sexed atmosphere of contemporary American culture.

The Hole is located at 312 Bowery. Virgin Birth ‘n’ Turf will be on view through October 6.

This entry was posted on Tuesday, September 18th, 2012 at 12:12 am and is filed under AO On Site, Art News. You can follow any responses to this entry through the RSS 2.0 feed. You can leave a response, or trackback from your own site.