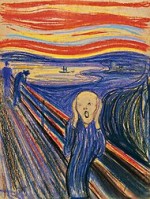 MoMA to exhibit Edvard Munch‘s 1895 version of The Scream on a 6-month loan from its new owner. The painting was recently sold at auction to an anonymous buyer, achieving the highest price ever paid at auction earlier this year ($120 million). The painting is the only one of four versions of The Scream that is privately held and has never been exhibited publicly in New York. It is the most colorful one of the series and is seen as a precursor to 20th century Expressionism. Although collector Leon Black is purported to be the present owner, neither Mr. Black, Sotheby’s nor MoMA confirmed as such. It will be on view from October 24 – April 29th.

Read the article via The New York Times

This entry was posted on Monday, September 17th, 2012 at 11:56 pm and is filed under Art News. You can follow any responses to this entry through the RSS 2.0 feed. You can leave a response, or trackback from your own site.