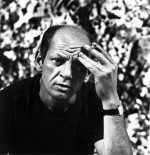 Jackson Pollock’s Red, Black & Silver has been pulled from Phillips de Pury & Company‘s Sept. 20th auction, because of a Vanity Fair profile on the painting’s controversial history. Supposedly Pollock’s last painting ever made, the work was owned by the late Ruth Kligman, Pollock’s mistress. She died in 2010, and it was never authenticated by Lee Krasner or the Pollock-Krasner Authentication Board, who could not corroborate the information given about the work. The executor of Kligman’s estate, Davey Frankel, stated: “Following the article in Vanity Fair, the [Kligman] Trust was approached by parties interested in possibilities for further study of the painting, and felt it in the interest of Ruth and Red, Black & Silver to investigate these options before taking the painting to auction.”  The piece is still consigned to Phillips for a future sale. Read more via Vanity Fair

This entry was posted on Tuesday, September 18th, 2012 at 12:01 pm and is filed under Art News. You can follow any responses to this entry through the RSS 2.0 feed. You can leave a response, or trackback from your own site.