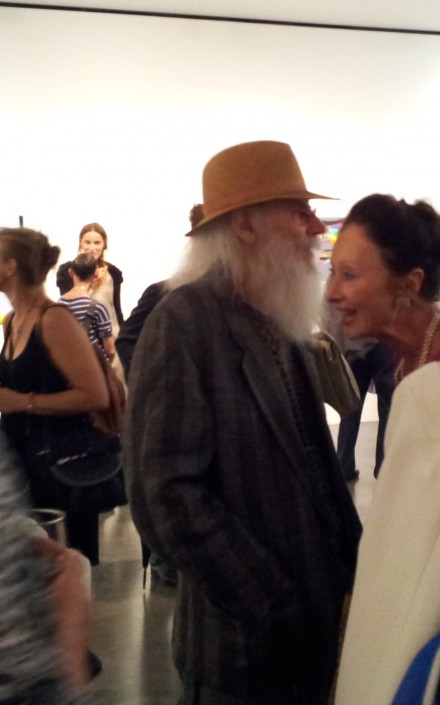 Pace inaugurated its new Chelsea gallery space at 508 West 25th Street on September 28th with a show of new works by artist Lucas Samaras. XYZ is comprised of four series of works created between 2010-2012. Twenty works, each a unique formal exploration of color, space and abstract patterning, announce the latest stage of evolution in his investigation of material manipulation, splicing reality through formal deconstruction and digital adulteration to offer a vibrant virtual universe. 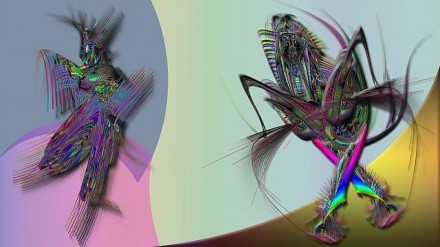 Represented by Pace since 1965, this is Samaras’s thirty-third show with the gallery, one of literally hundreds of exhibits dedicated to the artist. A native of Greece who emigrated to New Jersey at age 11, Samaras studied at Rutgers University with Allan Kaprow and George Segal, and soon became a mainstay of the New York art world, participating in Happenings with Kaprow and Claes Oldenburg in the early ’60s, and working among colleagues Robert Whitman, George Brecht, Roy Lichtenstein, and others. From assemblages of events (Happenings) to assemblages of found objects (pin boxes, installations), Samaras seamlessly navigates a variety of media, including paint, sculpture, collage, print, furniture and jewelry design, and most notably, photography. 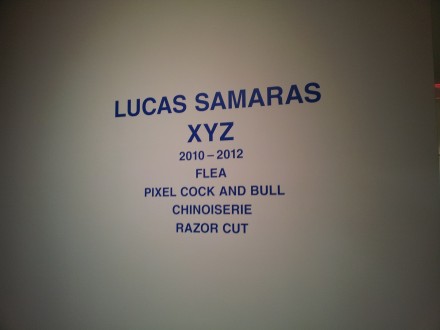 The artist’s own image, explored through a multiplicity of genres, often distorted or transformed, appears in his most recognizable artworks almost obsessively in focus. Environmental self-portraits, such as Room (1964), a gallery installation based on his bedroom, his “Auto-Interviews,” and the subsequent proliferation of “Auto-polaroids” exemplify the use of self as subject and metaphor. Samaras’s likeness, however, is decidedly absent in XYZ, representing a venture into new thematic terrain accompanying a shift away from traditional photography. 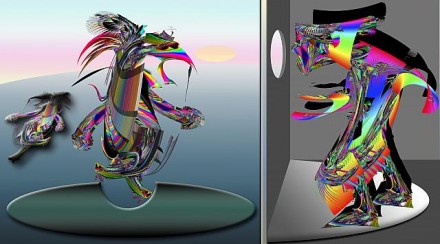 While this current project offers a distinct departure from his familiar subject matter (himself), these series demonstrate a continued interest in the manipulation of form, color and space, epitomized by his iconic “Photo-Transformations”–experiments in Polaroid photography begun in the 1970s. Recognized for his pioneering innovations in photographic operations, Samaras’s early methods of upsetting photo-emulsion processes and underdeveloped dyes yielded abstract phantoms of color, images that squirm out of their physical constraints and dissolve material stability to engage psychedelic illusions with pictorial reality. Succeeding this manual proto-Photoshop, Samaras now takes full advantage of the effects afforded by technological interventions, altering images digitally as well as creating original imagery devoid of any photographic source material. 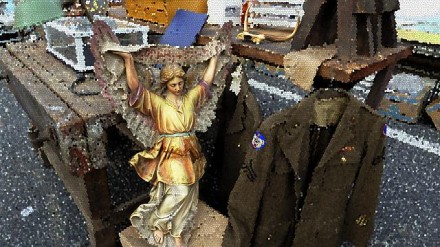 The XYZ Flea series contains the only works in this exhibit with a photographic foundation, based on pictures taken at New York City flea markets. Through digital doctoring, Samaras transforms urbane material banality into transcendental sparkling visions, crystallized into mosaic-like prisms of Byzantine monumentality. The image disintegrates into pixellated passages of bright colors and splintered geometric fragments, which seem to coalesce into smooth, unadulterated coherence in the figure of an angel, in poignant moments of volumetric illumination. 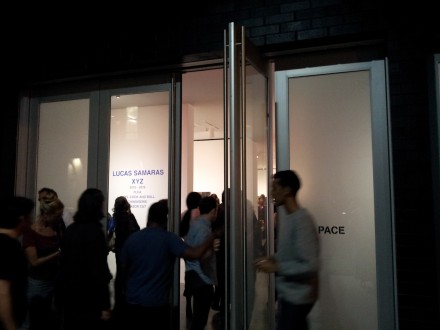 Where the beehive lattice-work confronts spatial recession in Flea 0657, Flea 0001 functions through a more subtle agent of distortion. With multiple axes of mirroring, the spaces evolve into impossible internal reflection of themselves, folded upon cross-axes in unexpected asymmetries. A fringe of cropped imagery, floating objects and buckled space contribute to the disorientation of reality, complicating spatial logic and undermining the viewer’s conviction of where reality ends and Photoshopped illusion begins. 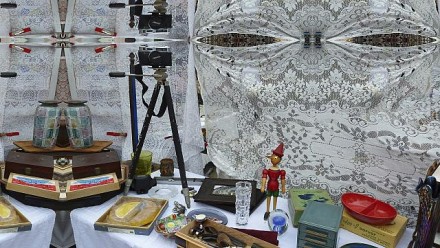 While the Flea series introduces elements of fantasy into a recognizable human environment, works in the rest of the exhibition occupy completely fictional worlds. For the Razor Cut works, Samaras has generated from his imagination a universe in psychedelic technicolor, luminous constructions of lines and planes that swirl in indefinite brilliance, bold and dynamic, abstract and yet undoubtedly anthropomorphic. This phantasmagorical cast interacts across spatial and narrative fields, a surreal cyber-world that is no longer mined from reality, but materializes as expressionistic creation in slices of vivid polychromy. 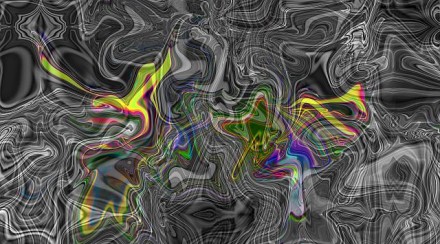 Chinoiserie and Cock and Bull cast off reality completely, concerned more with formal motifs and abstract patterns, while still employing similar compositional strategies and color schemes. Entangled threads of sinuous neon light rival Rorschach structures in their complex and elusive orchestration, psychologically charged in their abstraction and internal reflexivity. These images too elude spatial coherence, yet are fundamentally dimensional. 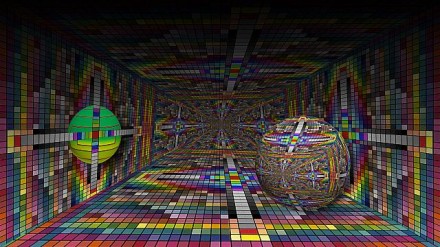 Vivid constructions of gridded virtual realities, digitally composed in both monochrome and opulent color, act as formal pendants to Samaras’ collage-like works hung on opposite walls, such as Reconstruction #64 and Mosaic painting #32. Utilizing strips of fabric, sewn into a web of overlapping patterns and criss-crossing textiles, Reconstruction’s mummified canvas echoes the geometric matrix of interlocking shapes in Mosaic Painting, whose interlocking black and white tesserae are punctuated by colorful compositions and a disarming hole in the picture plane — interrupting at once the superficial integrity and textural program of illusionism. A small pastel on the adjacent wall continues the exploration of depth and planar surfaces, with a naturalistic potted plant hovering on a backdrop of whirling rainbow spirals.

This entry was posted on Tuesday, October 23rd, 2012 at 12:35 am and is filed under AO On Site, Go See. You can follow any responses to this entry through the RSS 2.0 feed. You can leave a response, or trackback from your own site.