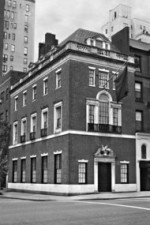 Galerie Perrotin and Dominique Levy announced separately that each will open their respective galleries at 909 Madison Avenue in 2013.  Galerie Perrotin has a 10-year lease on 4,300 sq feet of the former Bank of New York building on Madison and 73rd Street. Dominique Levy, co-founder of L&M Arts, will open her own gallery focusing on postwar and contemporary art. Levy said in a press release that her gallery space will occupy the second, third and fourth floors. Other galleries that have recently expanded include Gagosian in a suburb of Paris; Pace, Zwirner and Michael Werner in London and Lehmann Maupin in Hong Kong.

This entry was posted on Thursday, October 11th, 2012 at 9:14 pm and is filed under Art News. You can follow any responses to this entry through the RSS 2.0 feed. You can leave a response, or trackback from your own site.