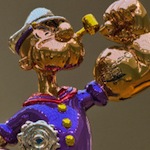 Larry Gagosian has dropped his lawsuit against collector Ron Perelman, stating that legal action had been taken only to establish Gagosian was the owner of the named artworks. The Perelman lawsuit concedes this fact, says Gagosian’s attorney, so he has no need to continue with the complaint. Mr. Perelman’s suit against Gagosian continues; it is related to the purchase of Koons‘ Popeye and other works for fraud, breach of fiduciary duty, unjust enrichment, negligent misrepresentation and breach of contract.

This entry was posted on Saturday, October 20th, 2012 at 1:02 pm and is filed under Art News. You can follow any responses to this entry through the RSS 2.0 feed. You can leave a response, or trackback from your own site.