December 28th, 2021
REFERENCE LIBRARY
Home » New York – “James Rosenquist: Multiverse You Are, I Am” At Acquavella Galleries Through October 13th, 2012

New York – “James Rosenquist: Multiverse You Are, I Am” At Acquavella Galleries Through October 13th, 2012 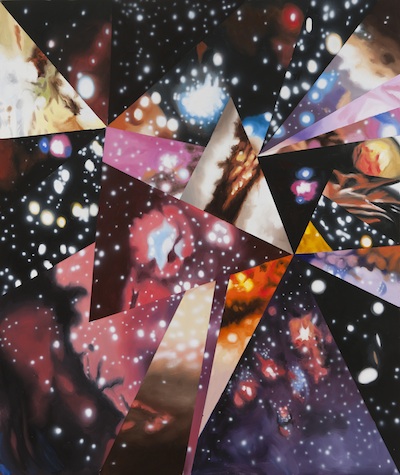 Spending much of his career exploring cultural and political themes, James Rosenquist takes an introspective approach in his show Multiverse You Are, I Am at Acquavella Galleries through October 13th.  Deeply affected by the brush fire that destroyed his Florida studio and personal collection in August 2009, the event acts as a catalyst for the exhibition. “There is no geometry in fire, only wildness and no logic,” states Rosenquist, whose works on display reflect a fascination with time, space, and chaos. Rosenquist has long been recognized for incorporating fragmented pictoral images in his paintings, yet in his most recent works, abstractions, patterns, and astronomical motifs play heavily. This is no coincidence, as the artist, who grew up in Depression-era North Dakota, spent much of his childhood gazing at the Northern Lights, star showers, and solar winds of the Great Plains. The brush fire, inciting an existential quandary, left Rosenquist reflective, questioning his relation to the world, reality, and the perceptual, as well as the passage of time. The exhibition features eleven paintings which grew out of Rosenquist’s response to his purpose as an artist. In his typical manner, Rosenquist combines, overlaps, and fragments his brilliantly colored abstractions, yet does so very jauntily, creating dozens of unique and disparate surfaces on the canvas. Working together, the abstract forms appear as if facets in a jewel, dictated by a fractal, or spawned from a crack in ice. The rhythmic patterns and celestial abstractions give rise to wholly organic pieces. 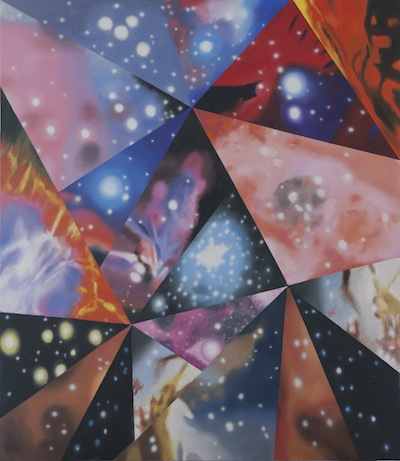 To this effect, Rosenquist has always been a storyteller, or at the very least, an arbiter of debate.  His earliest works, derived from advertising and mass media aimed to spark a dialogue about consumer culture, their fragmented compositions created an equivocal and challenging narrative. Multiverse You Are, I Am continues to provoke; meditating on time, space, and relativity, Rosenquist invites the viewer to behold his personal and enigmatic narrative.

All images courtesy of Prentice Communications on behalf of Acquavella Galleries.

Related Links
Multiverse You Are, I Am [Acquavella Galleries]
“Scarred, Inspired by Fire” [The Wall Street Journal]

This entry was posted on Thursday, October 11th, 2012 at 9:13 pm and is filed under Art News, Go See. You can follow any responses to this entry through the RSS 2.0 feed. You can leave a response, or trackback from your own site.