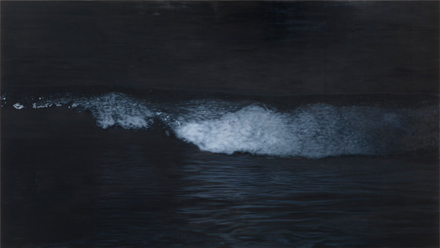 Currently on view at Gagosian’s 24th Street location is a solo show of the work of Richard Phillips.  The imagery mostly revolves around three internationally-renowned female celebrities: Lindsay Lohan, Sasha Grey and Adriana Lima, with the inclusion of one painting of the ocean at night. Through three videos and ten large-scale paintings, Phillips examines the superstar beauties and posits our fascination with them against one simple yet punctuating image. 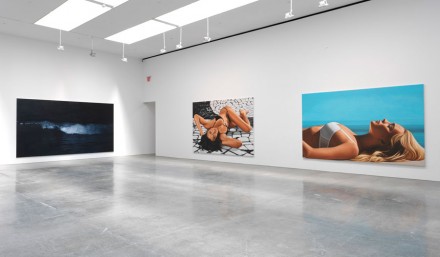 Two of the films, separate vignettes of Lohan and Grey, are dubbed “motion portraits” in Gagosian’s press release. (A fitting name for these quiet short videos, where neither actor speaks a word). Both movies are rife with lush imagery, gorgeous lighting, and intrusive close ups of the women’s faces. The show’s press release also denotes each actress’s self-conscious manner, which is apparent in the mannerisms of both of the stars. They are aware that they are being filmed – a quality unfamiliar to movie-making. Here, in both films, we watch both Lohan’s and Grey’s eyes dart to and fro – an intimate portal into the universal insecurities often overlooked in heavily idealized, publicized, and criticized individuals. A particularly riveting moment occurs when Lohan’s silhouetted hand reaches up and out to touch her own monumental onscreen face.

The third and most recent film, First Point, enters into an entirely different arena from the aforementioned videos. Phillips’s second collaboration with the notorious surf-centric filmmaker Taylor Steele begins as a sun-streaked, azure-tinged, wave-filled day at the beach. Over the course of the film it devolves into a darkened, surreal and nightmarish tale. Through staccato and destabilized editing, wide-eyed stares and an encounter with pro-surfer Kassia Meador — Lohan’s stunt double — an anti-climatic horror film is born. 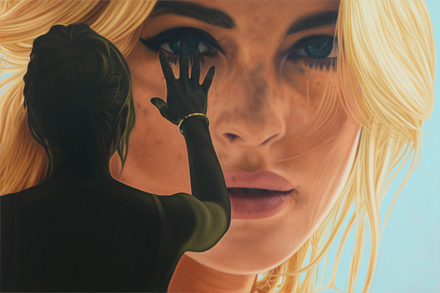 Stills from the three films are captured in seven of the mural-sized paintings hung on the inner walls of the gallery. They are painted with clean and considered photorealism. Six of the paintings are of Lohan and Grey. The paintings seem to announce their product status through neat surfaces and high reproductive quality. Perhaps an homage to Warhol’s infamous commercial product paintings utilizing contemporary women who are commodities within their own given industries.

The most haunting piece, however, is of the night-blackened ocean, arguably the most painterly. A mesmerizing, if not ostensibly darkly romantic scene called “Black Water”. 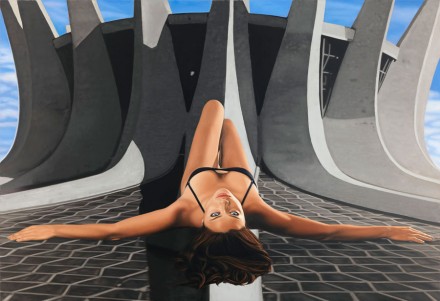 The remaining three paintings are all of supermodel Adriana Lima. In each one, she is suggestively poised in front of well-known Brazilian imagery – favelas, Copa Cobana, and Niemeyer’s Cathédral de Brasilia. Lima’s startling beauty against her country’s icons juxtaposes two of the nation’s national resources, as it were. 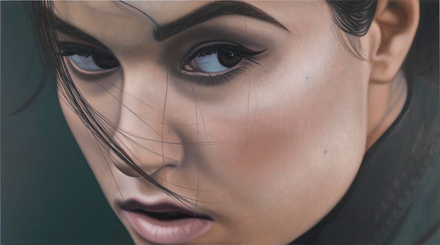 The exhibition is on view through October 20th at 555 West 24th Street.

This entry was posted on Monday, October 1st, 2012 at 8:05 am and is filed under Art News, Go See. You can follow any responses to this entry through the RSS 2.0 feed. You can leave a response, or trackback from your own site.