The Philosophy of Andy Warhol (From A to B and Back Again)
(Andy Warhol, 1977)
Read More and Buy↠
Home » AO Newslink 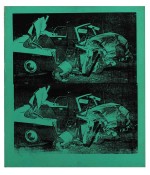 New York’s November auctions will offer several Warhol works, among them Christie’s $100 million sale of works in three separate sales from the Warhol Foundation, and at Sotheby’s two “A-plus” paintings from the “Death and Disaster” series. Concerns that an influx of Warhols on the market have lowered demand stem from weak London sales for the artist earlier this month.Read the article via The Art Newspaper

This entry was posted on Sunday, October 21st, 2012 at 8:47 pm and is filed under Art News. You can follow any responses to this entry through the RSS 2.0 feed. You can leave a response, or trackback from your own site.