Adel Abdessemed’s exhibition, Je Suis Innocent,  at the Centre Pompidou in Paris showcases work from 1990-2012, which spans the majority of Abdessemed’s artistic career. Born in born 1971 in Constantine, Algeria, Abdessemed often makes reference to violent histories and the taboos of modern culture with shocking and jarring imagery that he creates through a variety of media. 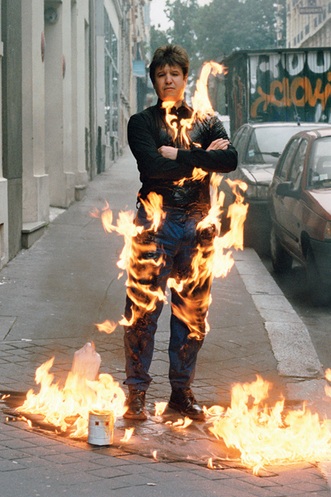 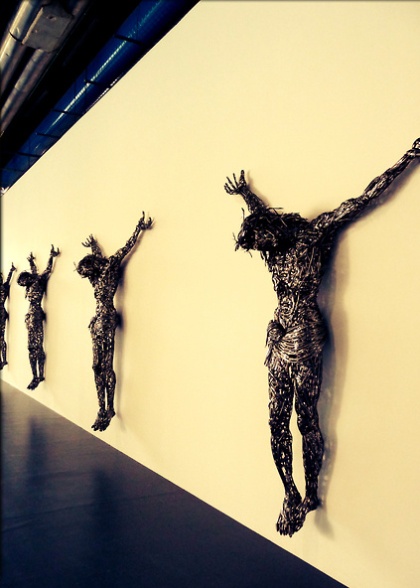 The four depictions the crucifixion that are mounted along a single wall defy the treatment to which one is generally accustomed of this very familiar subject matter. This series is entitled Décor, and was constructed over a period of one year. The pieces are crudely comprised of barbed wire with entangled razor blades, allowing the viewer to visualize the suffering in an array of grotesque implications. The anguish present on Jesus’s face is intensified by the metal’s inclination towards the light – the blades and barbs refract and reflect the light in a guiltily aesthetic manner, almost accusing the viewer himself of seeking visual gratification for the subject’s suffering.

This quasi-accusatory, provocative  approach is continued throughout the show as visitors wade their way through wreckages, distorted fragmentations and nightmarish depictions. 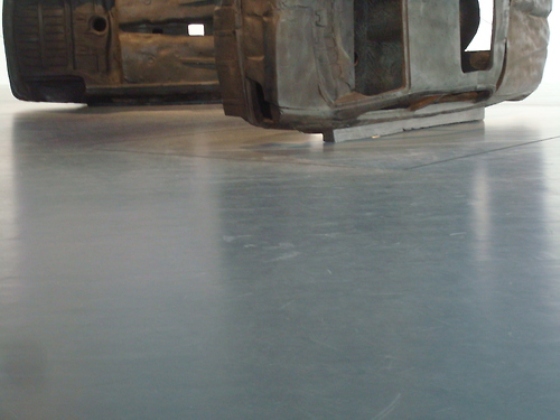 References to modern catastrophe and chaos surface in overturned, burnt out cars in Practice Zero Tolerance (2006), which lies poignantly and ambiguously on the floor. The skeletal shell of the remaining body of the car echoes the frail, skeletal figures of Christ. These works, along with the rest of the show, are connected by a consuming blackness of fatality. 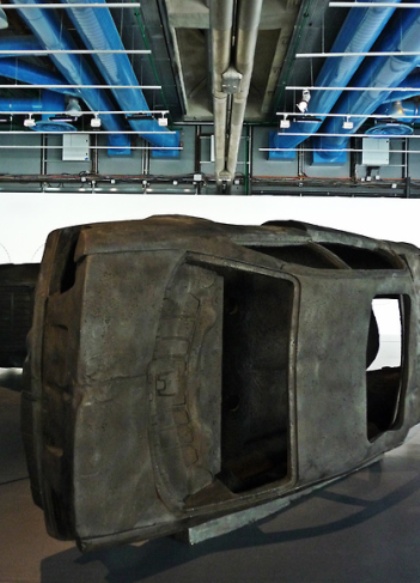 Furthering the abyss of pain and suffering insinuated throughout the gallery, an immense wall panel (Who’s Afraid of the Big Bad Wolf?-2011-2012) hangs with 3D appendages grappling toward what appears to be a bid to escape the remains of an all consuming fire. The limbs belong to stuffed toy animals which contradict the scale and foreboding presence of the show.

The innocent symbols of childhood have been obliterated; they are black and charred in appearance and now firmly intertwined with each other. The panel echoes Picasso’s Guernica with a desaturated palette and fragmented imagery; however the modern medium of the soft toys brings Abdessemed’s piece firmly into the present. 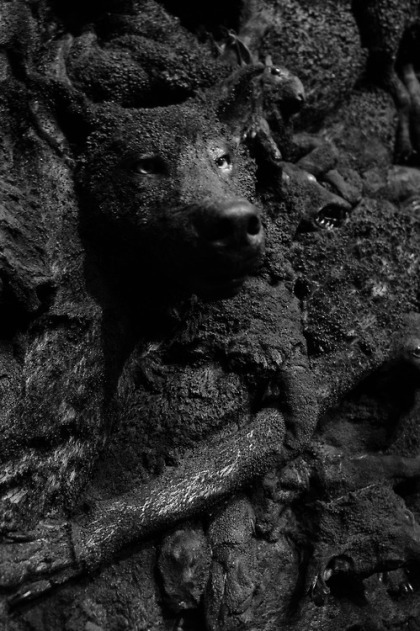 Another piece that repeats the trend of unconventional media is the paradoxically gnarled yet tenderly sculpted plane: Telle mere tel fils (2008) – “Like Mother Like Son”. The delicate composition of what appears to be a wreckage once more plays with the idea of guilt within the aesthetic. The viewers imbue the objects with ideas and meanings of their own. Finally, placing the work squarely within the now, is the monumental blackened sculpture of Zinedine Zidane’s (a French soccer player) infamous head butt. The event, thoughviolent, received much media attention. The sculpture, beautifully crafted and regarded as a work of great technical accomplishment, is a piece which forcefully contradicts its subject, revealing its own corruption.

This entry was posted on Wednesday, October 31st, 2012 at 12:00 pm and is filed under Art News, Go See. You can follow any responses to this entry through the RSS 2.0 feed. You can leave a response, or trackback from your own site.