Leopold Museum to auction $17.6 million of Schiele drawings to pay for restitution claims 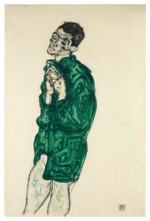 The Leopold Museum has consigned three Egon Schiele drawings with a presale estimate of $17.6 million to Sotheby’s for their London sale in February. The sale of the works will pay for a restitution settlement of a 1914 Schiele painting which the museum purchased at auction in the 50s, years after it had been looted by the Nazis. The museum has settled on payments with 3 rightful heirs of the work to keep the painting. The founder of the museum, Rudolf Leopold, felt that the institution was not subject to Austria’s restitution law; however his son arranged to settle all outstanding claims after his father passed away in 2010. Read the article via Bloomberg

This entry was posted on Monday, November 26th, 2012 at 9:45 pm and is filed under Art News. You can follow any responses to this entry through the RSS 2.0 feed. You can leave a response, or trackback from your own site.