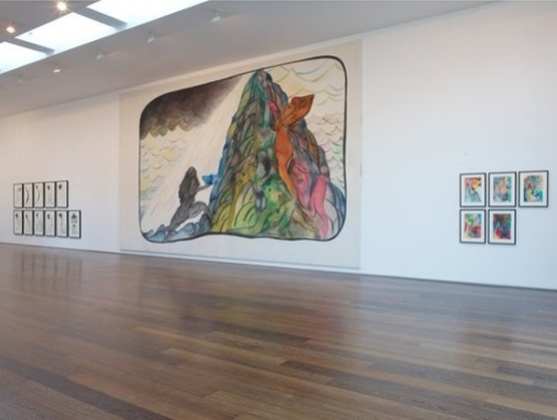 Chris Ofili’s latest collection of works  on display at Victoria Miro in London are actually intended for use as backdrops for a collaborative piece that involved The Royal Opera House, The Royal Ballet and the National Gallery. The project, involving artists, choreographers and dancers, depicts scenes from Ovid’s Metamorphosis that were in turn been recreated by Titian in a trilogy of paintings recounting stories of Diana and Actaeon, Diana and Callisto and The Death of Actaeon.

The narratives recall Diana’s nude encounter with Actaeon upon which she turns him into a deer and he is consequently killed by his fellow hunters; the revelation that Callisto, one of Diana’s nymphs who is sworn to chastity, is impregnated by the god Jupiter and subsequently banished; and finally a depiction of Actaeon’s gory death. 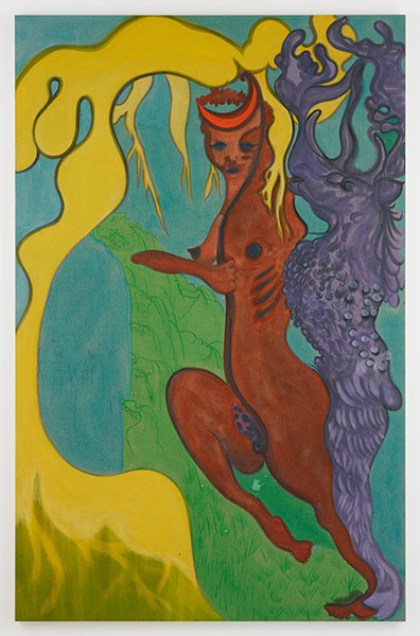 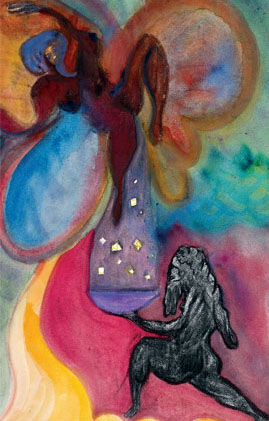 Ofili, born in 1968, is a Nigerian artist known for his controversial work. He  also known for his lawsuit against  then-NYC mayor, Rudy Giuliani, for censorship of The Holy Virgin Mary, his depiction of a black Madonna surrounded by snapshots of scenes from blaxploitation movies, pornographic close-ups of genitalia and elephant dung. 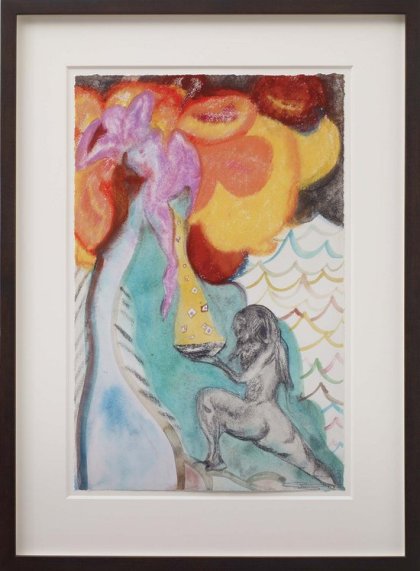 To take and to give is arguably one of Ofili’s most tranquil, submissive works, a mixed media of blended water colors and acrylics, pencil pastel and charcoal. The way in with the materials are juxtaposed is a distinct departure from his former collages, which often possess a clear divide between the different mediums within the final images. 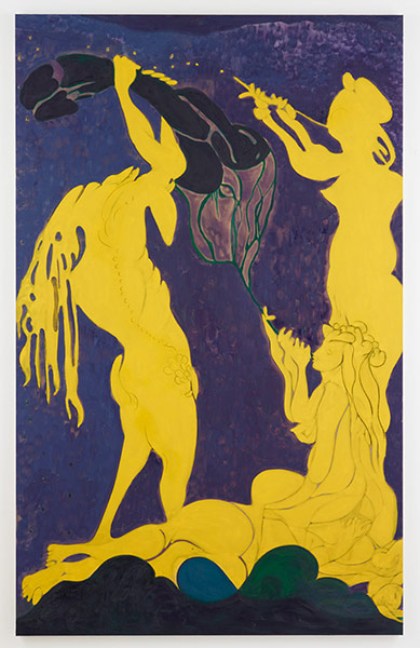 Ofili’s smaller ‘outlined’ pieces within theseries, such as Study for Diana and Actaeon, are comprised of whimsical-looking outlines filled with faint, watery, ethereal colors that appear comprised of only primary shades. They have a virgin white background that one could read as the innocence of Actaeon when he unintentionally encountered Diana bathing. The transparency of the paint further reinforces this sense of virtue and purity that surrounds Actaeon portraying his hardship as he is metamorphosed into a deer.

The translucent, ghostly yet vibrant shades associate Actaeon with Diana’s nymphs, seductively connect the unworldly creatures under the spell of Diana. The connection between Castillo and Actaeon in their innocence is also made apparent in Ofili’s colorations. Ovid’s Metamorphoses suggests that Castillo was tricked into bearing Jupiter’s child as he posed as Diana herself in a ploy to seduce her, implying that Castillo was raped. 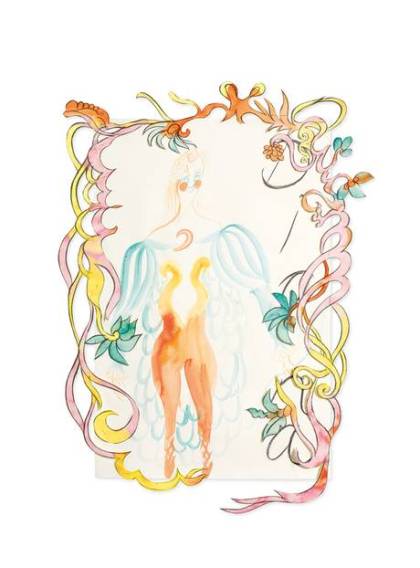 The centerpiece of this exhibition consists of an eight meter-high pyramid of nymphs, whose feminine forms are intertwined and interlinked in a vibrant mesh of color. Mermaid-like in appearance and tone, the cartoonish aesthetic provides a childish, playful essence to the piece that contradicts its literary heritage.  In many ways Ofili’s somewhat juvenile illustrations subtly mock Titian’s work and, in turn, the Ovidian concepts around which the ballet is based hint at the artist’s classic stamp of rebellion.

This entry was posted on Tuesday, November 6th, 2012 at 11:09 am and is filed under Art News, Go See. You can follow any responses to this entry through the RSS 2.0 feed. You can leave a response, or trackback from your own site.