Moscow – “Joseph Beuys: Appeal for an Alternative” at The Moscow Museum of Modern Art, Through November 15th

Joseph Beuys, I like America and America likes Me, 1974, courtesy MMOMA

Appeal for an Alternative is a manifesto of the late Joseph Beuys’ works and the first and thus far most comprehensive retrospective of his to be shown in Russia. It features excerpts from his Marx series, the collection fromThe Institute for Foreign Cultural Relations, The Van der Grinten collection, the Joseph Beuys Archive and the Joseph Beuys Media Archive.  It has been curated by Eugen Blume, a major Joseph Beuys specialist and Head of the Nationalgalerie im Hamburger Bahnhof − Museum für Gegenwart, Berlin. The title for the show is based around his 1950s Western Man project, which incorporated elements of World War II in which Beuys himself was enlisted as a soldier.

The German artist was born in 1921 and passed away in 1986, widely regarded as one of the most influential figures in Russian contemporary art. His work employs a philosophical and political dialogue that translates his opinion regarding the topics into a visual language, interpretable by all, yet paradoxically ambiguous. He commonly makes use of industrial mediums within his work that symbolize different societal elements; the presentation of these elements encourages anarchy and rebellion among his spectators and fuels the controversy behind Beuys’ concepts.

A screening of his greatly provocative and controversial work, I Like America, America Likes Me, plays alongside his various other series in Appeal for an Alternative. The piece takes the form of a video installation, whereby Beuys lived with a coyote for three days in 1974. The living conditions he created within his habitat and the actions he performed when in proximity of the coyote were allegorical and symbolic –  in many respects, an articulation of the prevailing trauma of mankind. Beuys commented that “a reckoning had to be made with a coyote, only then could this trauma be lifted”. 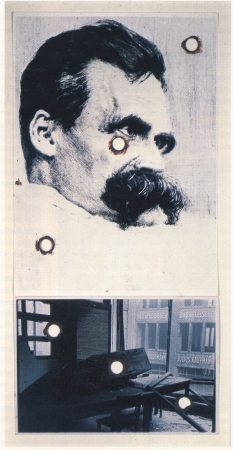 To address the “psychological energy point of the United States’ energy constellation” (as Beuys put it), he arranged himself in a funnel of felt holding a flashlight so that the material encompassed him and then he poked the head of a staff from beneath the blanket. He then bended at the waist and proceeded to follow the coyote around the room, and with it, the 20th century trauma he was attempting to admonish. During this ‘performative’ act of living, the coyote urinates on a stack of Wall Street Journals that has been purposefully positioned within the room. This incendiary act is highly emblematic of Beuys’ expressions. 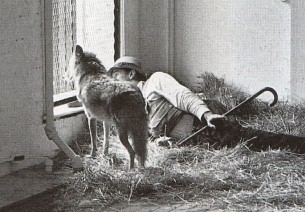 Joseph Beuys, I Like America America Likes Me , 1974 Courtesy MMOMA

At the beginning of Beuy’s procedure, he taps a triangular pendant three times as an alchemical symbol of femininity, fire and wisdom, which incorporates somewhat of a primal atmosphere into his performance. Juxtaposed alongside his simplistic ritual is a loud noise reminiscent of a turbine engine; this is said to signify the undetermined energy held within humanity. Throughout the recital Beuys pulls on a pair of gloves suggesting he is master of the animal – and therefore the presence of the chaotic energy that he feels is encompassing America. His appearance, as he traipses after the coyote, seems to pay homage to a stag, a sturdy and strong figure among wildlife with an aesthetic similarity to a primal nomadic shelter. He seems to be consistently referencing the natural, simplistic elements of mankind and the distance between America and that sensibility. 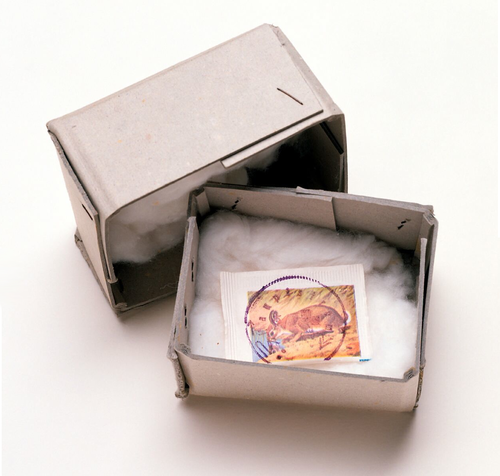 Beuys often referred to his works as anthropological – he was very interested in the development of a civilisations and the way in which humans functioned. He believed that all persons could be deemed as artists and that all professions and disciplines had an end product of creation, whether it be something aesthetic or even something medical (thus spiritual). 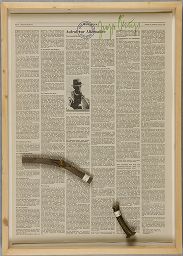 Another work in the show is Tramstop, an apparent segment of a single track that is refined to a point at one end and lies parallel to a cannon-like formation that morphs into screaming head at the other. The distorted figurine lies flat supported by three, large barrel-like components that act as an aesthetically unstable pedestal for the pained object. Alongside of the single track, which is presented opposite to the anguished entity, is a stack of stanchions that seem be an anomaly relative to the random components of the work. (Stanchions are commonly used as a building component as a structural support – this is a rather ironic addition to the seemingly unstable positioning of the piece). 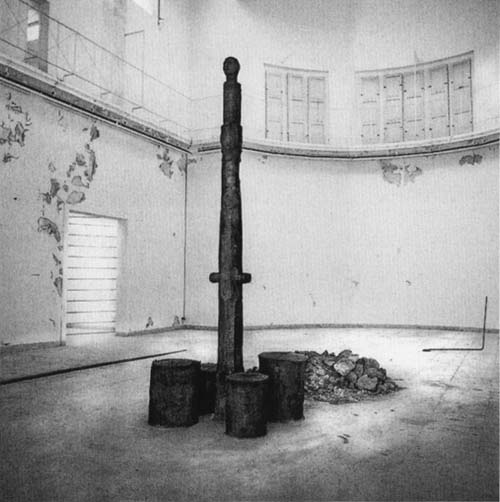 The collaboration of the two pieces that simultaneously coexist to comprise Tramstop evoke a foreboding atmosphere surrounding the work. The figure is flat as if lying down, its lack of appendages seems to hint at the helplessness of the paralyzed object and the iron medium suggests its minimal worth, its form echoing the crucifixion. Beuys was intent on finding a “way to be free of the materialistic ideals of the capitalistic society” that surrounded him, and which leave the downtrodden in a hopeless position.

This entry was posted on Wednesday, November 14th, 2012 at 6:04 pm and is filed under Art News, Go See. You can follow any responses to this entry through the RSS 2.0 feed. You can leave a response, or trackback from your own site.