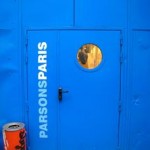 Parsons School of Design will reestablish its Paris presence, opening on November 29th with a reception at the Palais de Tokyo. Frank Alvah Parsons initiated a Paris program in 1921 for the school (which was then New York School of Fine and Applied Art). The French program closed during World War II but reopened upon merging with The New School for Social Research in 1970 but has since become less connected. “We see this less as a satellite campus and more of a node and network system,” said Joel Towers, the school’s executive dean.Read the article via NY Times

This entry was posted on Tuesday, November 13th, 2012 at 9:46 am and is filed under Art News. You can follow any responses to this entry through the RSS 2.0 feed. You can leave a response, or trackback from your own site.

One Response to “AO Newslink”