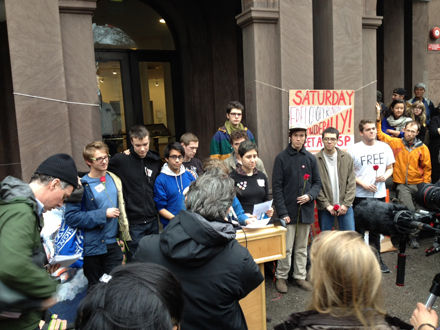 The student occupiers at their press conference Monday, December 10th at noon. Photo by Phoebe Pundyk for Art Observed.

The eleven students who have been occupying the Cooper Union clock tower exited at noon yesterday from the Peter Cooper Suite. Sleeping bags in tow, the students (many of whom wore homemade t-shirts with “FREE” scrawled across them) were greeted with cheers. Although none of their original demands were met by the administration, the group felt it was time to end the lock-in: that they had made their point and that their work would be better carried on from the ground. They were accompanied by their dean, who handed each student a single red rose. This is just the beginning of a long road to resolution. 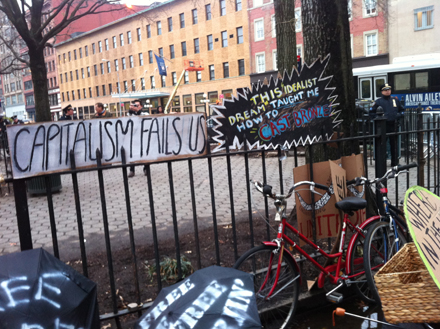 Signs accumulated at the gate in Cooper Square directly below the windows of the lock-in. Photo by Jennifer Lindblad for Art Observed.

The announcement came on the heels of success: on Saturday, December 8th the Students for a Free Cooper Union organized a city-wide rally and march from Washington Square Park to Cooper Square. The event was attended by over 150 people (with ample video), which was peaceful and friendly in nature. NYPD accompanied the march across town and then retreated to a respectful distance as the crowd gathered at Cooper Union. The eleven students welcomed their supporters with waves from the clock tower until they were asked by the school not to do so anymore for the safety risks involved. A petition for representation at board meetings, which was started by an engineering student, now has over 400 signatures. 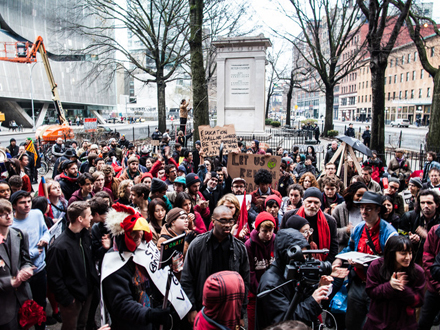 At noon today, the students held a press conference (a video recording can be found on Ustream). Surrounded by alumni, faculty and press, the students were hailed as heroes and, by one local reverend, saints. Reading from their press release, Kristi Cavataro related, “In the Peter Cooper Suite we spent our time writing, strategizing, talking to press, holding the space, and standing our ground. Eight floors below, our fellow students spent the week creating direct actions around campus […] As a unified community we brought local, national, and global attention to the longstanding principles of Cooper Union.”

The students’ biggest success came in the form of their ability to achieve so much press coverage in just a week’s time, from local blogs to international coverage, to a piece in this week’s New Yorker. In addition to being articulate students in general (alum and former professor Ben Degen dubbed them “the best and the brightest […] smart and socially conscious leaders”), the secret to this success lies no doubt in Victoria Sobel, who spent much of last year working with Occupy Wall Street.

Regarding the administration’s failure to meet their demands, the students stated, “We’ve never counted on this administration to protect the college, but we gave them a chance. Now we feel empowered to meet these demands ourselves.” The group’s most nervy demand– the resignation of the school’s president Jamshed Bharucha– was met with silence by the president himself and opposition from the school’s administration, who voted unanimously in his support. In their press conference today, the students once again renounced Bharucha, stating that his “absence and lack of direct communication over the past week has made it clear that he is a liability to this institution. We can declare without hesitation that Jamshed Bharucha is no longer our president.” 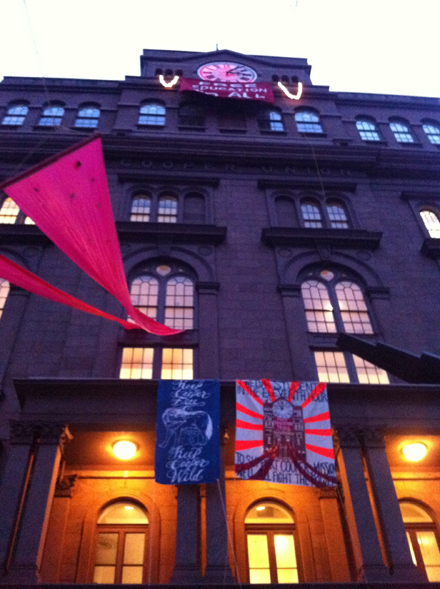 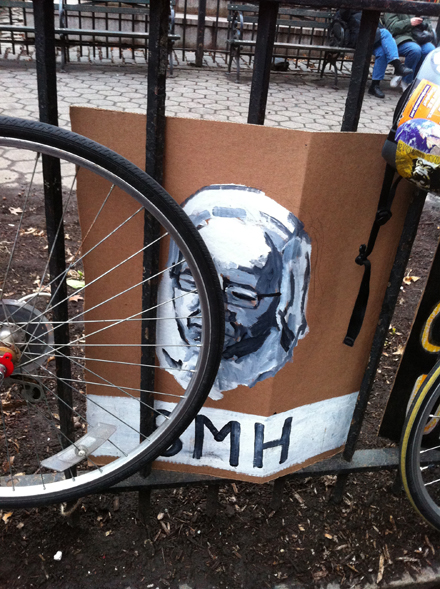 Founder Peter Cooper “shakes his head” at the thought of tuition. Photo by Jennifer Lindblad for Art Observed.

The decision to end the lock-in was discussed all weekend, following a somber but not rigid press release issued by the school on Friday, December 7th. It states, “We must explore and evaluate a range of options—without prejudging any. In order to retain the prospects for full tuition scholarships, you must retain The Cooper Union […] It is important that despite the understandable passions involved, we remain engaged in a civil process as we attempt to resolve critical issues relating to the institution’s future and survival.”

About the decision, Casey Gollan, one of the eleven, told Hyperallergic: “We felt really good, because we had shaken up some of the administration. We had fulfilled some of the demands in terms of transparency with those board meeting minutes. I think they’ve been put in a really weird place. I can’t see them trying to defend these weird balances of power for much longer.” Gollan continued, “We have a strategy going forward, which isn’t to burn out on one action […] Our demands still stand, and some of them we can fulfill ourselves, and some of them we’re starting to see cracks in the administration’s confidence.”

Since the lock-in, Gollan shared with Art Observed, “students have organized into a new spokescouncil model for shepherding a long term strategy of involvement.”

After the press conference, a lively song-and-dance session ensued, but not before long the students were on their separate ways to shower, sleep, and catch up on the rigorous academic work they had put on pause during the occupation. No action by fine arts majors would be complete without an image to encapsulate the events: a witty and warm holiday card which the group dispersed to the crowd during the press conference. It stands in juxtaposition with the students’ brazen ending to their speech to press today: “Our only regret is we didn’t lock in sooner.” After the past week’s events, no one can doubt the group’s fire, nor their warmth, as they attempt to pave the way for future generations of tuition-free students at one of the nation’s most important art institutions. 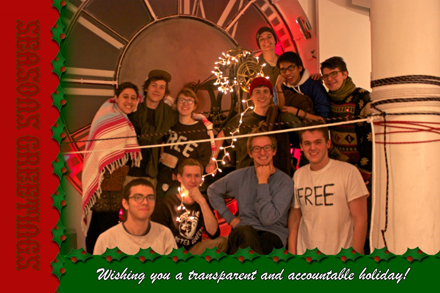 Holiday card courtesy the Students for a Free Cooper Union.

This entry was posted on Tuesday, December 11th, 2012 at 1:43 pm and is filed under AO On Site, Art News. You can follow any responses to this entry through the RSS 2.0 feed. You can leave a response, or trackback from your own site.