March 3rd, 2021
REFERENCE LIBRARY
Home » Peter Doig Speaks to Demand for his Work and How He Attempts to Ignore It 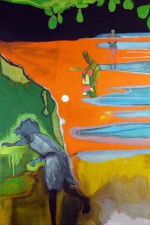 In 2007, Peter Doig saw his prices skyrocket, due to an auction in which his “White Canoe” sold for $11.3 million, several times over the presale estimate of $1.5 million. Overnight he became the most expensive living European artist. The following year, Tate Britian mounted a midcareer retrospective. Doig discusses how he has had to block out thoughts of the sudden spike in prices to stay focused and successful creatively. Recently, Michael Werner Gallery inaugurated its new Mayfair gallery with a solo show by the artist. Prices range from $250,000 to $3 million.

This entry was posted on Sunday, December 16th, 2012 at 5:31 pm and is filed under Art News. You can follow any responses to this entry through the RSS 2.0 feed. You can leave a response, or trackback from your own site.