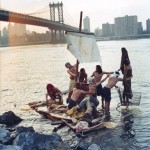 The Brooklyn Museum announced today that it will hold an ambitious retrospective for the secretive art collective Bruce High Quality Foundation this summer.  The show, titled Ode To Joy: 2001-2013, will include a broad number of works (“under 17,000″ according to a BHQF representative) from the collective’s decade of creative activity, and will document their ongoing practice of satire, political commentary, and exploration of contemporary America.

Read more at The Brooklyn Museum

This entry was posted on Wednesday, February 27th, 2013 at 3:45 pm and is filed under Art News. You can follow any responses to this entry through the RSS 2.0 feed. You can leave a response, or trackback from your own site.