September 28th, 2020
REFERENCE LIBRARY
Home » Collector Claims to Have Found a New Piece of Courbet’s “Origin of the World” 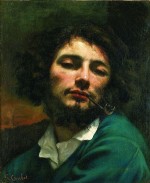 An unnamed collector has come forward, claiming that he has found an upper section of Gustave Courbet’s immediately recognizable nude, “Origin of the World.”  The new segment depicts the subject’s head and sholders, complimenting the notorious section of the work primarily depicting her genitalia, that now hangs at the Musée D’Orsay.  The new section has been confirmed by leading Courbet expert Jean-Jacques Fernier, who says that he is “convinced” that the works are two parts of the whole.

This entry was posted on Friday, February 8th, 2013 at 4:55 pm and is filed under Art News. You can follow any responses to this entry through the RSS 2.0 feed. You can leave a response, or trackback from your own site.