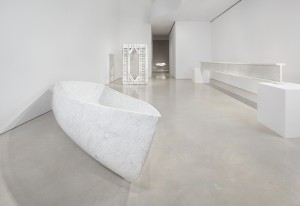 Exploring the intricate interrelations between object, environment, product and creator, Italian sculptor Fabio Viale creates staggeringly lifelike marble busts of the the everyday, paying homage to the vast heritage of Italian sculpture while inviting a range of interpretations and correlations between his works.  For his first solo show at New York’s Sperone Westwater gallery, titled Stargate, the artist is exhibiting a selection of recent works that juxtaposes the classic medium against the often banal detritus of contemporary society, in turn exploring the values afforded to each. 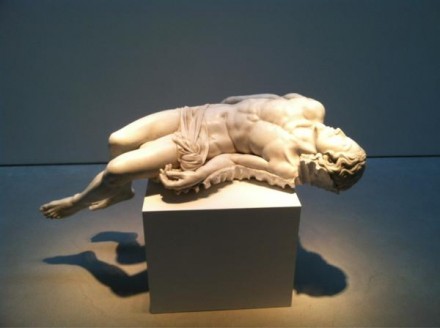 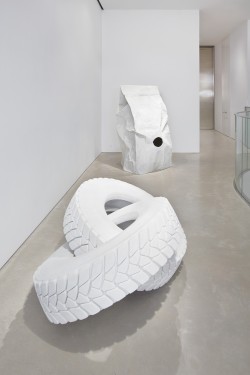 Subverting the images of the divine so commonly associated with marble, Viale’s work combines a studied understanding of both his material, and its cultural history.  Upon entering the Bowery gallery, visitors are immediately greeted by a bust of the Madonna, painstakingly crafted to appear as a flaking block of styrofoam. 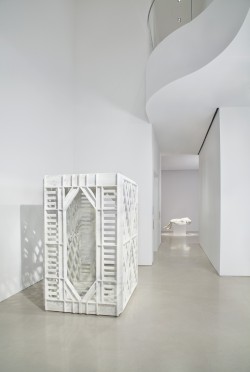 This dissonance between the creative aura and the cultural implications is repeated throughout the show in various configurations.  In one room, a pair of paper bag heads stand guard at a absurdly oversized scale, while an infinity loop constructed from old tires sits between them.  While the humorous elements are unavoidable, one cannot help but marvel at the attention to detail and near perfection of the sculpting, affording the pieces a surreal sense of displacement.

But perhaps the most striking work sits at the back of gallery.  Titled Souvenir Pieta, Viale has created a personal simulation of Michelangelo’s cherished work.  However, Viale’s work rips the fallen Christ from his mother’s arms (her hands are still present on her son’s back), and dangles him awkwardly over a cold, white pedestal.  The implications are ominous: while the idea of the Pieta and its fellow masterworks lives on, something significant is lost in the translation to commercial product. 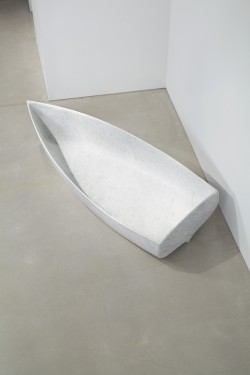 Taken as a whole, the pieces on view at Viale’s solo exhibition explore not only the medium of marble and the cultural signifiers afforded it, but also takes into account notions of time and duration.  By working in such a durable material, Viale has created a series of works that will stand as a comment society’s appraisal of the arts for centuries to come. 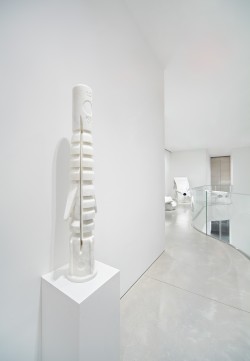 This entry was posted on Friday, February 8th, 2013 at 12:01 am and is filed under Art News. You can follow any responses to this entry through the RSS 2.0 feed. You can leave a response, or trackback from your own site.