Rome – Tracey Emin – “You Saved Me” at Galleria Lorcan O’Neill through February 16th, 2013

Currently open in Rome, Galleria Lorcan O’Neill’s fourth presentation of Tracey Emin’s work is a mature, low-key, yet penetrating selection of the artist’s diverse practice, showcased in both of their spaces on Via Orti D’Aliberti.  Emin has recently been appointed Commander of the Order of the British Empire (CBE), as well as a professor of drawing at the Royal Academy (RA) along with Fiona Rae, making them the first two women to be elected into the academy.  Given her entrance into these exclusive circles as an official representative of British culture, the Italian location of this show offers an interesting reevaluation of Emin’s art. 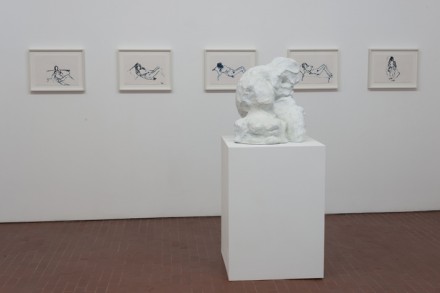 Tracey Emin CBE, RA is a British-born artist, and part of the second wave of Britartists or YBAs (Young British Artists).  Defining British Art in the 1990’s along with others such as Sarah Lucas, Gary Hume, Tacita Dean and Chris Ofili, Emin had her first breakthrough with the inclusion of Every One I Have Ever Slept With 1963-1995  in Charles Saatchi’s exhibition Sensation at the Royal Academy London in 1997. The boldpiece consisted of a tent appliquéd with 102 names of people that she had slept with or beside; family, friends, lovers, and two unnamed fetuses. In 1999, she was a Turner Prize nominee with the piece My Bed (1999), showcased at the Tate Gallery, where she exhibited her bed with yellow stained sheets, bloody underwear, condoms, cigarettes and other personal objects. Later that year, she created a number of monoprint drawings commemorating princess Diana for a themed exhibition called Temple of Diana at The Blue Gallery in London, showcasing her capacities for artistic empathy alongside that of her own introspection. 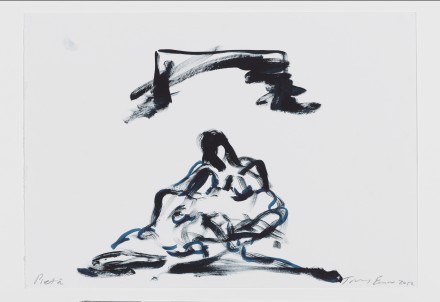 A large selection of the pieces on show are gouaches on paper depicting nude women in different positions, many lounging in day beds. Less detailed and autobiographical than much of Emin’s previous work, her pieces on view seem to address and reevaluate the history of the female nude in western art and sculpture, particularly given the show’s historic locale.  Her embroidered calicos have a similar aesthetic; in Still life (2012) a women is being given cunnilingus, and in Just Waiting for you to come back into my mind (2012) a woman is lounging on day bed, as if Emin has sought to redefine the artistic image of the nude through the contextual moorings of each work’s title. 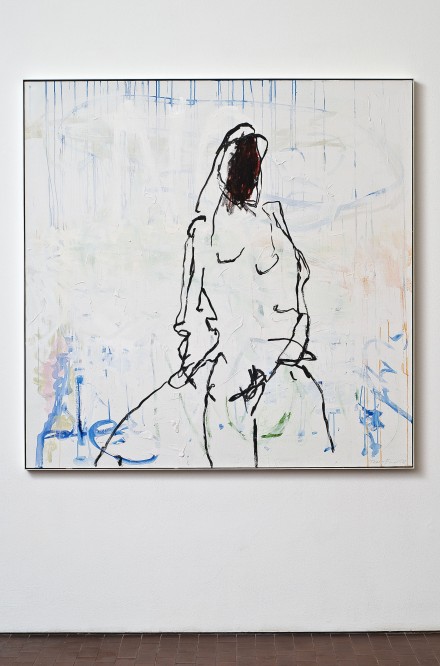 Emin’s fluorescent neons, some of which are on view here, are a staple feature in prominent art fairs and collections world wide.  Lehmann Maupin showcased You Loved me Like a Distant Star (2012) at this year’s Art Basel Miami,and here, Galleria Lorcan O’Neill exhibits several more of Emin’s neons in key positions. Somwhat fittingly, her work I keep believing in You (2009) meets the visitor on the wall opposite the entrance to the main gallery. 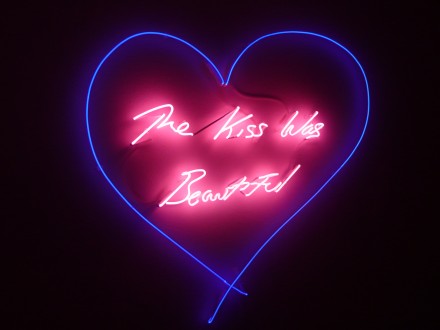 Tracey Emin, The Kiss Was Beautiful (2012), via Galleria Lorcan O’Neill

Three bronzes conclude and enhance the tone of the exhibition. Sphinx (2012) and Real Love (2012), two white patina covered bronzes in cat-like shapes, and Self Portrait with My Eyes Closed (2012), all recently on display at a solo show at the Turner Contemporary in Margate, are an ode to classic monumental art with a contemporary twist. 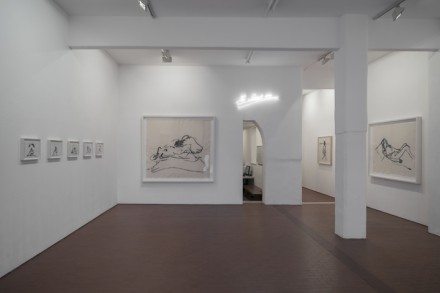 Through this exhibition, Galleria Lorcan O’Neill offers viewers a wide selection of works by Emin, and allows them a firsthand witness into the artist’s broad expanse of practice. The exhibition closes on February 16th 2013. 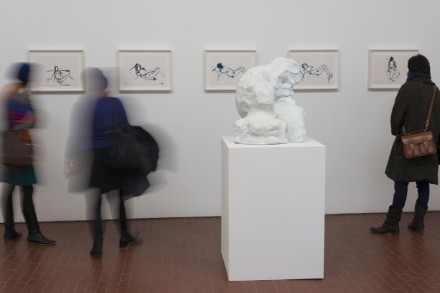 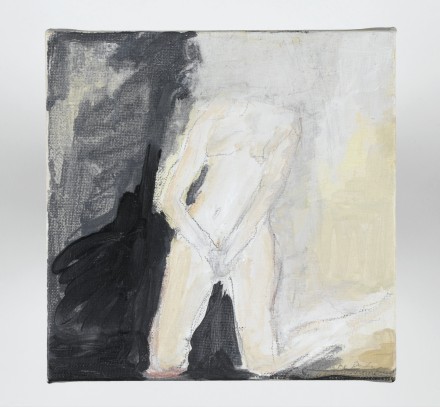 Tracey Emin, In the Dark (2006), via Galleria Lorcan O’Neill

This entry was posted on Sunday, February 10th, 2013 at 9:25 pm and is filed under AO On Site, Art News, Galleries, Go See. You can follow any responses to this entry through the RSS 2.0 feed. You can leave a response, or trackback from your own site.