Unfinished Michelangelo Sculpture to be Installed in Milan Prison 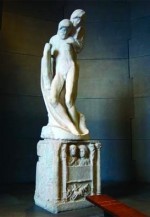 Michelangelo’s unfinished sculpture, La Pietà Rondanini, is being temporarily installed in a Milanese prison while its original home undergoes some much-needed renovations.  The work’s temporary home at Carcere di San Vittore has raised both criticism and praise from art historians, and is being applauded by foreign prison officials.  “It is welcome to see an example of high culture being moved into a prison. There is a long tradition of art projects aiding the journey of long-term prisoners as they serve their sentence.”  Says Andrew Nelson, of the Howard League for Penal Reform.

Read more  at The Art Newspaper

This entry was posted on Thursday, February 7th, 2013 at 1:45 pm and is filed under Art News. You can follow any responses to this entry through the RSS 2.0 feed. You can leave a response, or trackback from your own site.