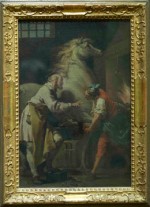 The French Government has announced that it will return seven paintings taken from Jewish owners by invading Nazi forces in the early-to-mid 20th Century.  The hand-over is part of new efforts to return stolen works to their rightful owners.  “It’s as much a moral issue as a scientific one.”  Said French culture minister Aurélie Filippetti, who underlined a need for a “proactive search” to return all looted works to their rightful owners.

This entry was posted on Tuesday, March 19th, 2013 at 4:11 pm and is filed under Art News. You can follow any responses to this entry through the RSS 2.0 feed. You can leave a response, or trackback from your own site.