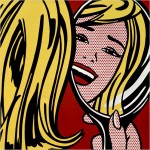 Dealer Larry Gagosian and collector Jan Cowles have reportedly settled their disagreement over the 1964 Roy Lichtenstein work Girl in Mirror.  The news was broken by Wall Street Journal reporter Kelly Crow on her Twitter account this morning.  A full report has yet to be released, so the details of the settlement has yet to be released.

This entry was posted on Sunday, March 10th, 2013 at 5:45 pm and is filed under Art News. You can follow any responses to this entry through the RSS 2.0 feed. You can leave a response, or trackback from your own site.