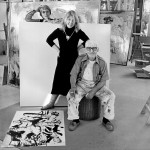 The New York Times has published a profile of the recently deceased Lisa de Kooning, daughter of 20th Century American painter Willem de Kooning.  The article traces her youth in New York City, her active championing of her father’s estate after his death in 1997, and her struggles with alcohol and drugs, which ultimately led to her early death.  “She had an immense amount of talent,” says actor Alex Kilgore, “but she knew what genius was and she could never free herself from her own eye.”

This entry was posted on Sunday, March 17th, 2013 at 8:04 pm and is filed under Art News. You can follow any responses to this entry through the RSS 2.0 feed. You can leave a response, or trackback from your own site.