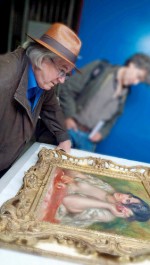 The New York Times has published a profile on art forger Guy Ribes, whose remarkably accurate forgeries of works by Pierre-Auguste Renoir are being used in the biographical film exploring the life of the late artist (Watch Trailer).  Ribes, who served several years in prison for forging works by renowned artists and selling them to a criminal art ring, was brought in to recreate works by Renoir, as well as works the artist may have painted.  “It’s funny, isn’t it,” Says writer Jean-Baptiste Péretié, “that the same thing that led to his conviction is what he’s being paid legally to do?”

This entry was posted on Monday, March 25th, 2013 at 4:27 pm and is filed under Art News. You can follow any responses to this entry through the RSS 2.0 feed. You can leave a response, or trackback from your own site.