The Philosophy of Andy Warhol (From A to B and Back Again)
(Andy Warhol, 1977)
Read More and Buy↠
Home » Fischl Tells All in New Book on 1980’s New York Art World 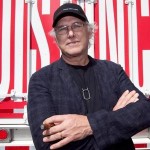 Painter Eric Fischl has published a memoir of the 1980’s New York art scene, chronicling the excesses and darker side of the high-profile art world of Andy Warhol, Jean-Michel Basquiat and Mary Boone.  Titled Bad Boy, My Life On and Off the Canvas, the tell-all book includes a story about an infamous 1983 party thrown by Keith Haring and Kenny Scharf, with “lookout towers, armed guards, and a glamorous crowd . . . some naked,” with waiters offering “glasses of Champagne [and] a choice of cocaine or heroin.”

This entry was posted on Sunday, April 7th, 2013 at 10:42 pm and is filed under Art News. You can follow any responses to this entry through the RSS 2.0 feed. You can leave a response, or trackback from your own site.