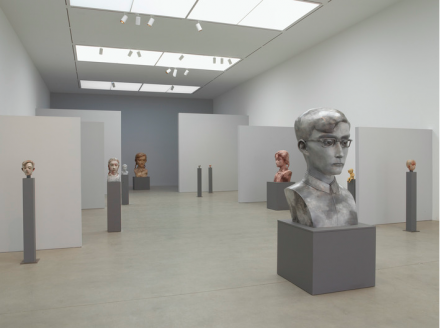 Currently featured at Pace Gallery’s space at 510 West 25th Street, is the first series of Zhang Xiaogang‘s painted bronze sculptures. At first glance it appears simply as a 3 dimensional representation of Xiaogang’s famous Bloodline characters, however there are in fact numerous dialogues in the works as well as the artist’s practise, that deepen and darken the situation. 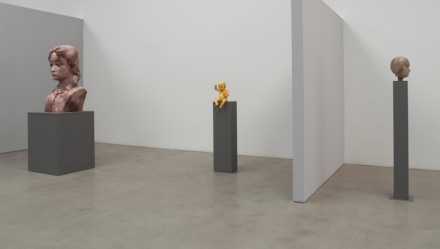 Mounted on grey pedestals, Xiaogang’s bronze busts are arranged throughout the space, representations of children painted in a range of dull, faded metallic colors. The works have an aged feel about them, coupled with the sombre expressions on each visage that suggest a degree of distance from the hopeful and idealistic tropes often attributed to the young. The Position Of Father, one of the few paintings in the exhibition, shows a baby, that is oddly similar in appearance to Xiaogang, with his manhood on display through a hole in his clothes. He sits on a chair next to a table with two teapots, a teetering lamp and another armchair, vacant save for a splash of yellow light. The baby looks expectantly over at the empty chair, to where his father would likely sit. 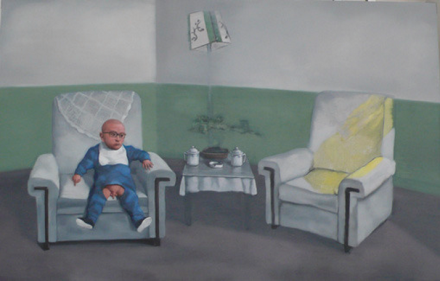 Zhang Xiaogang, The Position of Father (2013), via Pace Gallery

Xiaogang’s artistic practise began to bloom near the collapse of Mao’s reign and the accompanying reforms of the Cultural Revolution. After being separated from his government-employed parents, Xiaogang was sent with his brothers, to a “study camp”. After the end of the regime, Xiaogang would enter the prestigious Sichuan Institute of Fine Art where he began exploring his ideas of family and groupings. His own familial experience influenced his work greatly. In Bloodline, for example, Xiaogang uses a stylized recreation of Chinese portraiture often seen during the Cultural Revolution, but explores  distant, depressed facial features that creates an emotional commentary on Chinese culture and an eerie atmosphere that is difficult to ignore. 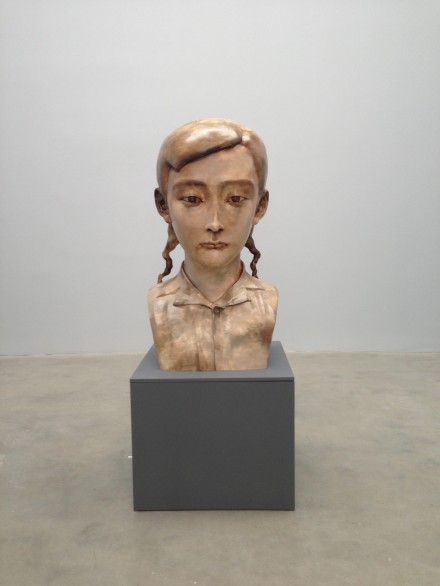 Considered somewhat of an icon for Chinese contemporary art, and one of the country’s highest acclaimed and most valuable artists, Xiaogang’s work is intriguing in its confrontations of cultural references and history. For a country with a history of artistic censorship and a short patience for political subversion, Xiaogang’s Bloodline, and the subsequent sculptures on display seem to tread a very delicate line. The references to domestic life of the Chinese public are coupled with personal histories that demand quite different reactions than the proponents of the Cultural Revolution would have hoped for. 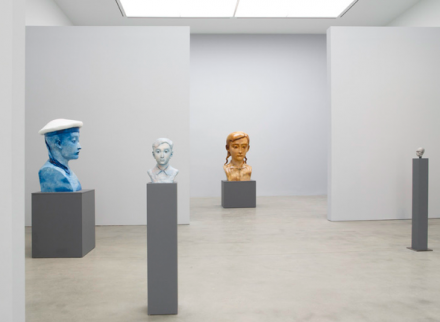 In the frame of China’s cultural orthodoxy and state-sponsored identities, Xiaogang’s sculptures position the children of China as “state-sanctioned sculptures of the Cultural Revolution,” but the placement and representation of these innocent, vulnerable faces as cultural icons seems redirected, almost grotesque. One of the sculptures, the head of a boy, painted in pale grey tones, is sectioned off from the neck and placed atop an aggressive squared pole. Excess “paint” drips down the shaft as the boy stares off into nothing.  The work is at turns visceral, somber, and unnervingly placid. 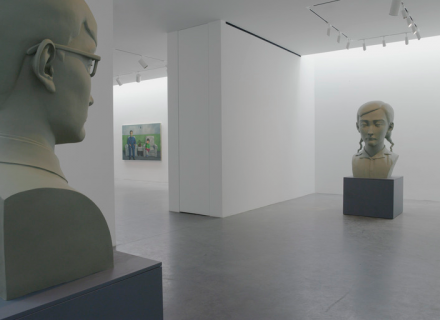 While Xiaogang has said that his work is not a commentary on Chinese culture, this unspoken contest between state and artist is incredibly dynamic. Even as an iconic artist, it seems his practice maintains a level of subversion, as he operates independently from the collective efforts of China’s political agenda. It may be an instinctual Western viewpoint of an artist’s struggle against an oppressive society, but the questions his sculptures and paintings raise gives the work real cultural drama and excitement, not to mention an irreplaceable, unique creative voice. 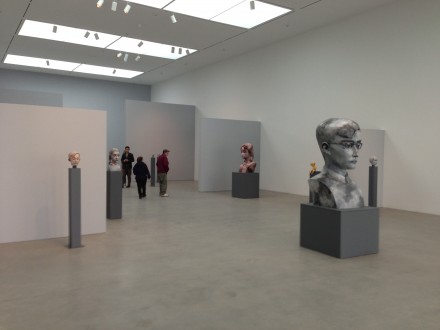 Playing at these tones of representation and history, Zhang Xiaogang’s new works show at Pace Gallery until April 27th, 2013. 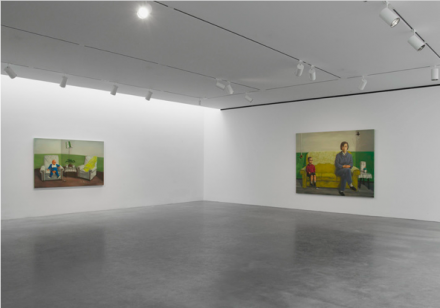 This entry was posted on Sunday, April 28th, 2013 at 1:27 pm and is filed under Art News. You can follow any responses to this entry through the RSS 2.0 feed. You can leave a response, or trackback from your own site.