Paris-Sabine Moritz at Marian Goodman Gallery Through May 4th, 2013 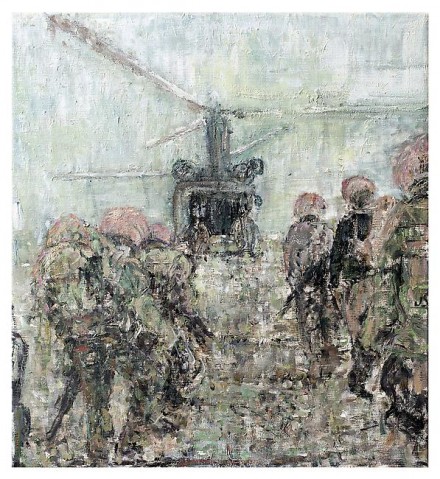 Limbo, the state of being suspended in time, between past and future, repose and action, is the title of Sabine Moritz’s first solo show with Marian Goodman Gallery in Paris.  Spread over two floors, the exhibition includes eighteen oil on canvas paintings, and over sixty drawings, a dense body of work started in late 2001.  Moritz, who lives and works in Cologne, Germany, was on her way to New York City on September 11th, when her plane was diverted up to Nova Scotia. For three days she was stuck in this remote landscape, with thousands of other displaced travelers, watching the events and its aftermath unfold. This period of waiting and disconnect, gave her time to reflect about the changing nature of borders, conflict, and the technology of war. 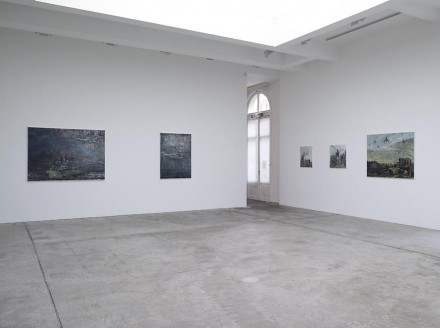 Most of the work in Limbo is culled from press clippings from a variety of publications following 9/11. Helicopters, soldiers, planes, warships, destruction, and chaotic landscapes; make clear reference to the state of war, but abstract the image by withholding any defining identity. Through layers of frenetic, linear brushstrokes, Moritz deconstructs the photographic reference, focusing her vision on isolated moments, hovering objects and figures at rest.  She is not interested in showing the violent, graphic images of war, preferring those intimate moments of pause, of limbo. Occasionally we see traces of figures or objects that have been erased, as if they disappeared just before we arrived. There is a feeling of unease, tension, uncertainty, but there is also a sense of calm. 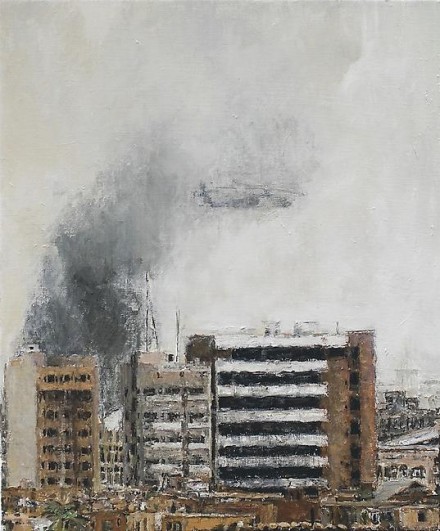 In Sleeper (2010), a lone soldier rests on his side. While the figure seems peaceful, his surroundings are obscured, kept alien and foreboding. Are those missiles behind him? Barbed wire? We have the same feeling of unease with In the Forest (2012), and Flight (2012), which show figures sitting or laying in a dreary landscape.  The viewer is uncertain of the intent of the subject, whether they are escaping, hiding, or about to attack. No matter which, traces of smeared, red paint at the feet of one figure does not bode well. Moritz reinforces this unease through the piercing brushstrokes that cut across their bodies and into the dense forest behind. 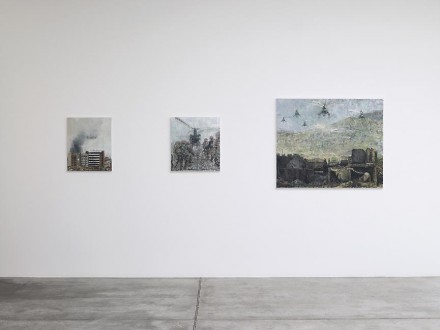 A recurring motif for Moritz is the helicopter, an emblematic image of recent wars and military engagements-from Vietnam to the raid on Osama Bin Laden. In Dust (2008), or Parade 1 (2007), the helicopter is placed as the central figure, hovering above a landscape.  In Kandahar (2004), two helicopters, one on top of the other, are shown towards the bottom of the canvas, about to emerge from a large white flurry of smoke.  One arches up or maybe is about to crash. A couple of small figures are seen below. The outcome is uncertain for all, ominous and disturbing in the ambivalence of action on view.  In Mortiz’s series of drawings, done in charcoal, oil stick and graphite, she repeats the force of the blades in motion, the sweep of the body of this crucial wartime aircraft. 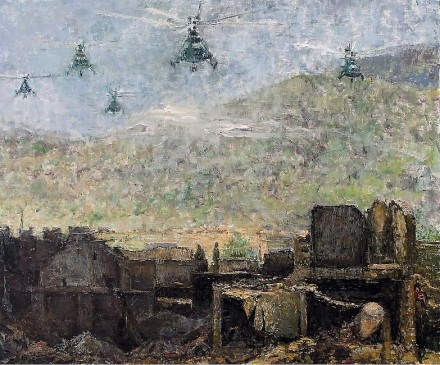 Moritz’s images feel timeless, or rather, suspended in time. Painted in muted, earthy tones of green, gray, brown, and dark blue, with occasional spots of yellow or red, they produce the impression that a veil is covering each canvas. Nearly out of focus when looking up close, the viewer only begins to take in the full image from a distance, when the layers and textures of brushstrokes start to reveal themselves. 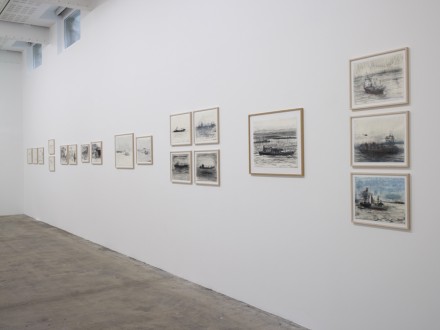 We can’t look at this body of work without thinking about Moritz’s upbringing in East Germany. Born in a small town near the border in 1969, the artist grew up amid the anxiety, economic hardships, and isolation of the cold war regime.  She experienced first hand the atmosphere of threat, fear, and displacement like the figures and moments she captures in paint. Limbo is unspecific, unwilling to moor itself in a singular place or identity, and because of this it resonates on many levels. Old or new, the graphic images of war: suffering, fear, and loss, remain the same, and resonate just as powerfully.

Limbo is on view through May 4th. 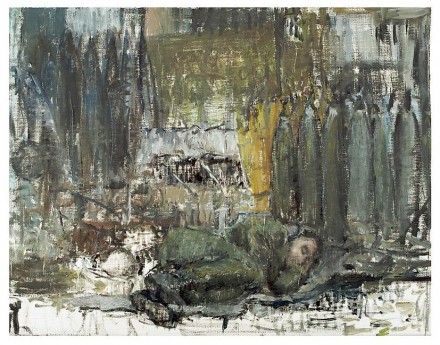 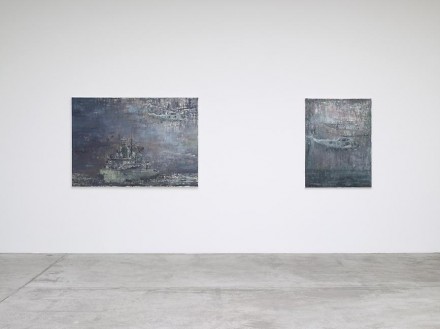 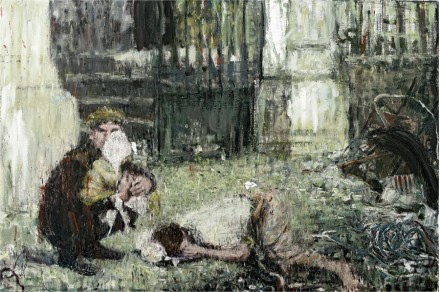 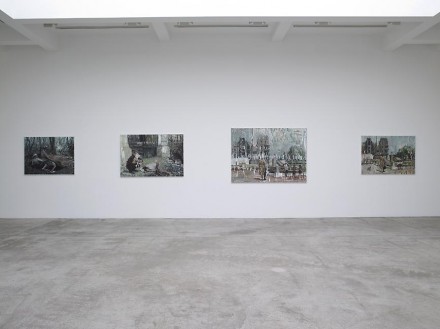 This entry was posted on Monday, April 29th, 2013 at 12:09 am and is filed under Art News. You can follow any responses to this entry through the RSS 2.0 feed. You can leave a response, or trackback from your own site.