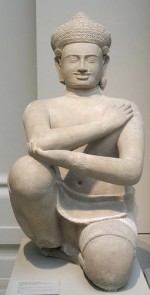 A pair of statues from the Metropolitan Museum of Art’s Southeast Asian collection will be sent back to Cambodia, officials announced this week.  The “Kneeling Attendants” were smuggled out of the country during the violent Cambodian civil war of the 1970’s, and were donated to the museum in the late 1980’s.  “This is a case in which additional information regarding the Kneeling Attendants has led the museum to consider facts that were not known at the time of the acquisition and to take the action we are announcing today,” said Met director Thomas P. Campbell.

This entry was posted on Saturday, May 4th, 2013 at 11:08 pm and is filed under Art News. You can follow any responses to this entry through the RSS 2.0 feed. You can leave a response, or trackback from your own site.