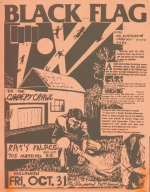 MOCA has announced that will begin airing a video series, titled “The Art of Punk,” looking at the roots of some of punk rock’s most iconic logos and artwork.  Created by Bryan Ray Turcote and Bo Bushnell, the series features interviews with a number of musicians and artists, including Jello Biafra, Henry Rollins, Raymond Pettibone, and Winston Smith.  The series will debut on June 11th, with an episode on Black Flag.

This entry was posted on Monday, May 20th, 2013 at 12:21 pm and is filed under Art News. You can follow any responses to this entry through the RSS 2.0 feed. You can leave a response, or trackback from your own site.