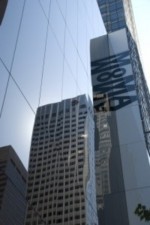 Following MoMA’s announced re-evaluation of its plan to demolish the former American Folk Art Museum, The New York Times has published an editorial examining the Museum’s impact on Midtown, and the distinct design of the Folk Art Museum in contrast with MoMA’s sleek facade, and the problems MoMA’s design currently presents for the art it exhibits. “Economic development encourages the proliferation of glass giants, tourism and ever bigger museums, but not always smart streets or better culture.” says writer Michael Kimmelman.

This entry was posted on Monday, May 13th, 2013 at 10:11 pm and is filed under Art News. You can follow any responses to this entry through the RSS 2.0 feed. You can leave a response, or trackback from your own site.