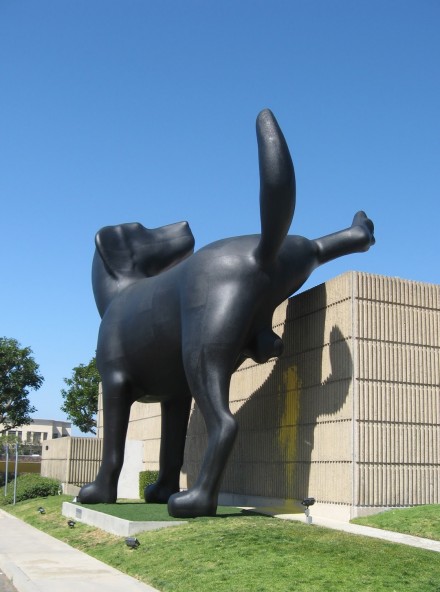 The Orange County Museum of Art is currently presenting the first retrospective of Los Angeles-based artist Richard Jackson. Known for his radical expansion of painting’s practice and definition over the past 40 years, Jackson’s personal take on “action” painting invigorated its performative potential, and brought it into the sculptural dimension, while extending his practice into everyday life. Jackson’s pioneer approach to making paintings most likely has roots in his homestead upbringing. Sacramento born and raised, he spent most of his free time on a 2,000 acre ranch as a child before going on to study art and engineering at Sacramento State College. 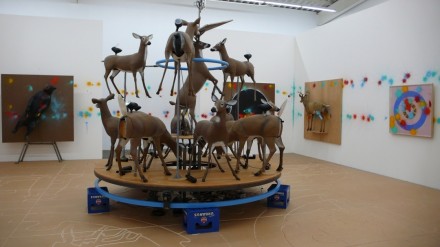 Prominently featuring the museum-commissioned Bad Dog outside of the exhibiting space, Jackson’s show unfolds over 11 room-sized installations featuring work from 1970 to the present.  Many works on display have previously not been exhibited in the United States, including an early sculpture that was planned but sat uncompleted until 2012. The show comprises the three major approaches Jackson has embraced during his career: large scale wall paintings, room sized “painted” environments, and “stacked paintings”.  Preparatory drawings and models related to the works are also included. 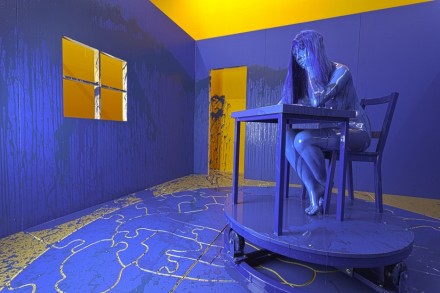 Jackson has rarely been exhibited in the US, save for a 1988 mid-career survey at Houston’s Menil Collection.  Due to the dynamic, complicated demands for exhibition of his works, it has proven difficult for Jackson to find an institution that has been able to accommodate his peculiar creative visions., particularly his machines spewing or squirting paint. Galleries and museums have also had difficulty with his instructions that most pieces are to be destroyed at the end of the exhibition. The messy ephemerality of Jackson’s work also spills over into the viewing experience, often forcing viewers to become active participants, either by scrambling through, on or over his work to see various aspects of the piece. This wholly innovative approach broke free of almost all traditional attributes of how paintings are created and viewed. 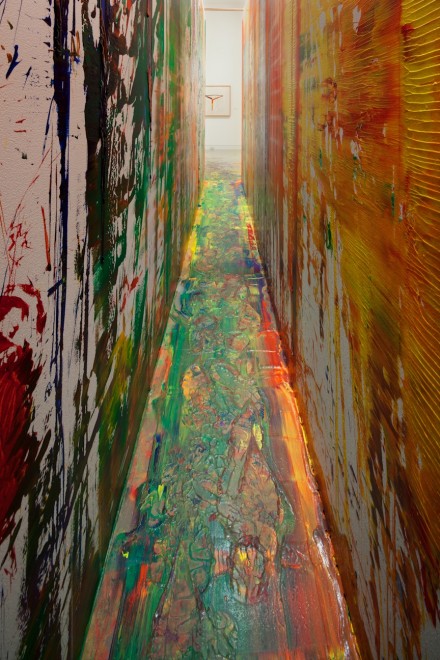 Untitled (Maze for Eugenia Butler Gallery) is a particularly good example of Jackson’s bizarre and demanding works, an enclosed 20×20 installation of stretched canvas wall measuring 9′ high and “painted” by sliding a wet canvas along through the structures maze-like corridor.  A new set of site-specific wall paintings were also produced for this exhibition, produced by sliding wet canvases against another surface, which Jackson then finishes by placing the backs of these canvases prominently onto the newly painted surface. By giving the backs of these canvases the same power as the front, Jackson once again transforms our thinking about painting, and reforms the relationship of paint to the final product of the art, doubling as both aesthetic element and bonding agent. 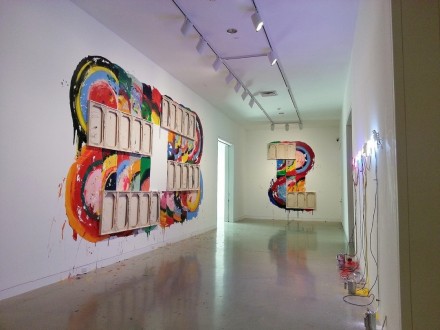 Also on view is the work, 5050 Stacked Paintings, which Jackson first conceived  in 1980, and finally completed this year. Made of 5,050 paintings, the installation is the largest stacked work the artist has ever produced.  Jackson’s painting machines are also on view, including La Gran Jatte (after Georges Seurat), where the artist recreates the famous 1886 pointillist painting made by mechanical techniques.  Jackson began this work in 1992, dipping pellets into paint and firing them at the canvas, one by one.  After an estimated 90,000 shots, the work is only almost 10% completed and will probably never reach full resolution. Other jabs at the art historical canon, from David to Picasso, are also taken by Jackson’s three-dimensional painting environments. 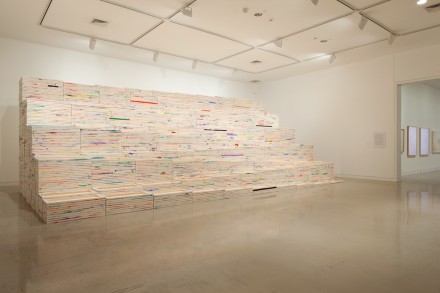 Two autobiographical works are also included, Deer Beer (1998) and 1000 clocks (1987-1992). The latter is comprised of a 1,000 clocks completely covering the walls and ceiling and all keeping time in unison. The overwhelming industrial feeling gives way as viewer realizes Jackson made each clock himself over a period of five years, completed to commemorate his 50th birthday. 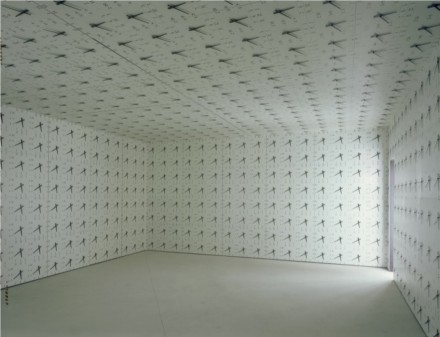 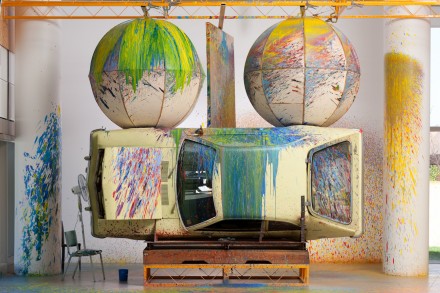 This entry was posted on Saturday, May 4th, 2013 at 8:01 pm and is filed under Art News, Galleries. You can follow any responses to this entry through the RSS 2.0 feed. You can leave a response, or trackback from your own site.