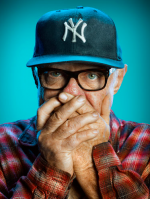 In advance of the world premiere of Paul McCarthy’s WS (for White Snow, a play on Snow White) next month at The Park Avenue Armory, The New York Times has published an expansive interview with the American artist.  McCarthy’s work is currently exhibited across New York, with two separate shows at the Hauser and Wirth Galleries, as well as a massive balloon dog at Frieze, and a sculptural installation at 17th Street and 11th Avenue in Chelsea.  The interview covers the artist’s work on WS, his childhood in Salt Lake City, and his perspectives on American consumer culture.  “I can see much more clearly now that we are living in the middle of this kind of insanity,” he says, “and it runs itself. And the really scary thing is that we’re not conscious of it anymore. It’s a kind of fascism. The end goal of this kind of capitalism is to erase difference, to eradicate cultures, to turn us all into a form of cyborg, people who all want the same thing.”  He says.
Read more at The New York Times

This entry was posted on Sunday, May 12th, 2013 at 9:40 pm and is filed under Art News, Go See. You can follow any responses to this entry through the RSS 2.0 feed. You can leave a response, or trackback from your own site.