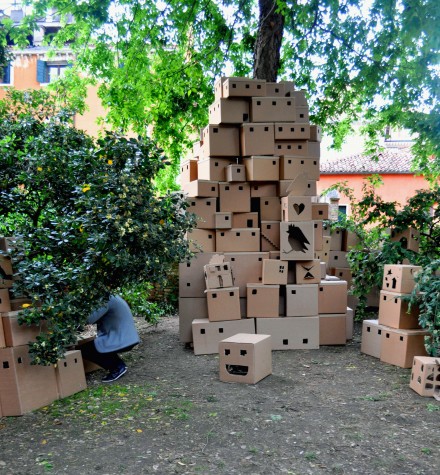 Otherwise Occupied is an exhibition of Palestinian artists organized by al Hoash, a Palestinian art organization based in Jerusalem, as part of the 55th International Art Exhibition at Venice Biennale 2013. The show is one of 48 Collateral Events hosted around the city. The exhibition features the work of two prominent, internationally renowned artists: Bashir Makhoul and Aissa Deebi. Makhoul is the head of the Winchester School of Art, England, while Deebi is a founding member of ArteEast, a Brooklyn-based organization that supports Middle Eastern art and culture. Both have exhibited work at the Elga Wimmer Gallery in Manhattan, and mainly work with photography. In the past, both have addressed the themes of diaspora, exile and, more broadly, Palestinian politics, unsurprising given that both artists were born inside the 1948 borders of Palestine, and have since immigrated to become citizens of other states. Currently, they are working in the globalized art world, exemplified by Massimiliano Gioni’s Central Pavilion, The Encyclopedic Palace. Nevertheless, the artists still consider themselves Palestinian, underlining the complex political identities of modernity Gioni expressed in his press conference. 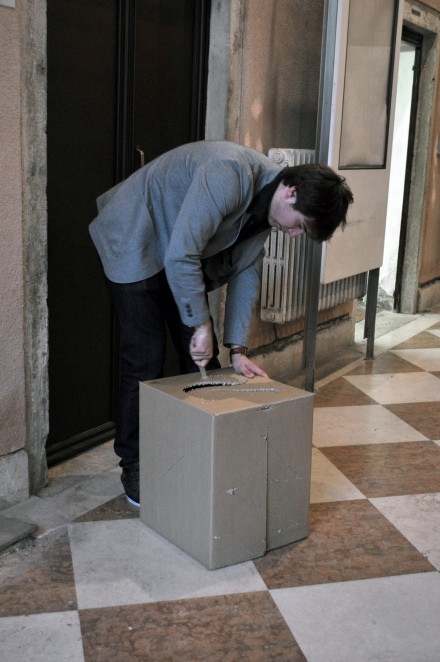 In fact, the unofficial Palestinian exhibition communicates new ways of conceptualizing the nation. While the pieces discuss the Palestinian occupation, the work attempts to convey that Palestine is not defined by the occupation. The word ‘otherwise’ in the exhibition’s title offers the opportunity for the art to delve into the questions of belonging, identity and place. By using technologies, such as GPS, which are traditionally used to formally map and define territories, the works are transforming the tools of political administration and control into mediums of art and contemporary communication. 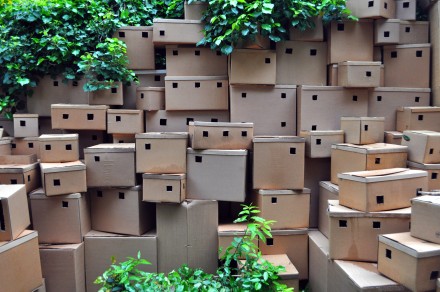 Makhoul’s work occupies the garden at Liceo Artistico Statale di Venezia, filling it with thousands of cardboard boxes for his Giardino Occupato. Both the artist and members of the public carry the boxes in over the course of the Venice Biennale. As such, the resulting shantytown is constantly growing in size and density, gradually overwhelming and engulfing the garden. The installation piece forces the viewers to personally engage with the occupation of the space. The amalgamation of boxes evokes a feeling of containment and claustrophobia, an emotion that will only intensify as the exhibition continues and the space fills. Disturbingly, the exhibition alludes to two divergent themes. Firstly, the work refers to the use of cardboard boxes to create a childhood imaginary world. Secondly, it alludes to the Settlements on the West Bank and the Palestinian refuge camps. The chaotic and impermanent arrangement of the boxes draws parallels with the poor housing conditions endured in the refuge camps, and enigmatically, the constant expansion of Israeli settlements across this politically contentious strip of land. 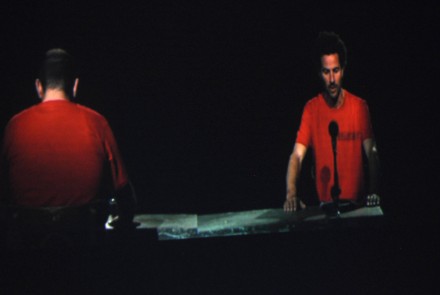 Deebi’s video work, The Trial, re-enacts the 1973 trial of Daoud Turki, a Palestinian poet and revolutionary. Turki was tried for treason by the Haifa District Court and sentenced to 17 years in prison, sentenced by a court that would not recognize his status as an Arab citizen of Isreal. The title of the video is derived from Franz Kafka’s surreal novel The Trial, in which a character faces a fictional predicament that is disturbingly similar to Turki’s reality, tried and imprisoned for mysterious, unnamed crimes. 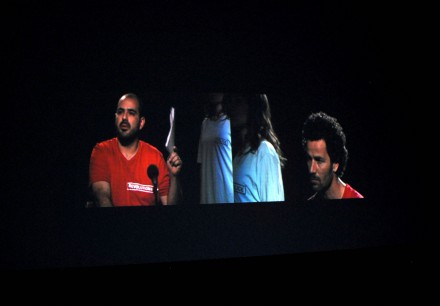 Compellingly delivered, Otherwise Occupied is a powerful perspective into the Palestinian condition, putting forth a challenging viewpoint on the complex ethno-political environment of the Israeli-Palestinian dispute. 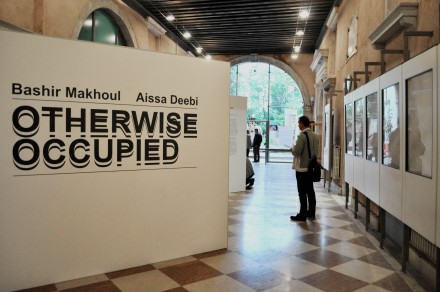 All photographs courtesy of Sophie Kitching

This entry was posted on Wednesday, June 5th, 2013 at 11:12 am and is filed under AO On Site, Art News. You can follow any responses to this entry through the RSS 2.0 feed. You can leave a response, or trackback from your own site.