Ed Ruscha in the New Yorker 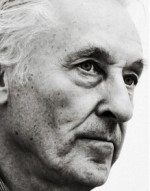 Artist Ed Ruscha is profiled in the most recent issue of the New Yorker, discussing his life in Los Angeles, his practice, and the inspiration for some of his most iconic works, including his famous painting Oof.  “It had one foot in the world of cartooning,” he says. “You get punched in the stomach, and that’s ‘Oof.’ It was so obvious, and so much a part of my growing up in the U.S.A. I felt like it was almost a patriotic word.”

Read more at the New Yorker

This entry was posted on Thursday, June 27th, 2013 at 3:52 pm and is filed under Art News. You can follow any responses to this entry through the RSS 2.0 feed. You can leave a response, or trackback from your own site.