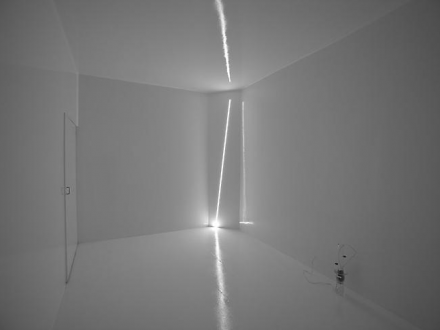 In one of the pale, white rooms of Lisson Gallery’s current show of works by Haroon Mirza, a light continually goes on and off, accompanied by a bizarre whooshing noise.  The sound is that of an ant, walking across a small copper plate buried inside of an ant farm, and mixed together with the sounds of a shower head draining into a plastic bin.  At turns confusing, surreal and immersive, the viewer cannot help but linger in this minimal environment, seeking to understand the subtle links between action and reaction. 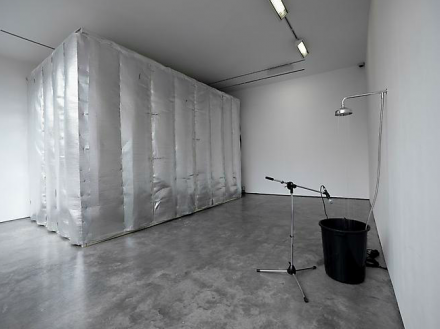 It’s just these sort of explorations between physicality, sound, and gesture that Mirza does so well.  Combining simple circuitry with a confluence of natural and commercial materials, his work consistently works at the construction of meaning within sounds, and the inherent impulses of sound itself.  For his most recent show at Lisson, the artist has assembled several of his most recent works, in which sound and light work in tandem to create dizzying new experiences and spatial exchanges. 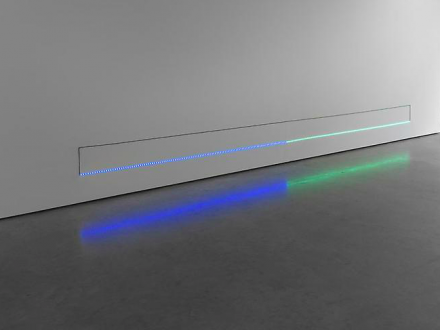 “Through listening we encounter new manifestations of time, new ways to understand space, yet we have no soundhouses such as those found in Sir Francis Bacon’s utopian isle of Bensalem, the New Atlantis, no 21st century vernacular architecture of sound or listening?”  writer David Toop inquires in an essay on Mirza’s website, giving an indication into the interest in the subjects he explores throughout his work.  His pieces often focus on the act of listening, using audio to continually reinforce and reinterpret the context and content of the sonic environment. 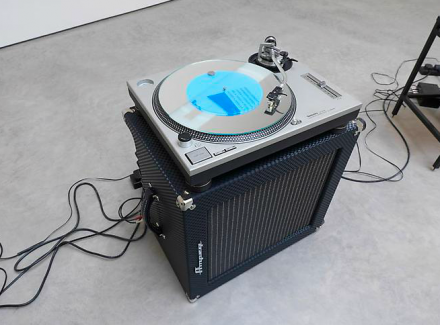 Haroon Mirza, Sitting in a Room (detail) (2013), via Lisson Gallery

In one work, Mirza appropriates the audio of Alvin Lucier’s seminal sound work I am sitting in a room, using its signature exploration of the audio environment to create a running loop of sonic collage, aided by the sounds of manipulated records, samples and droning rhythms.  Combining modern approaches to remixing with material outside the traditional dialogue of contemporary popular music, Mirza ties the act of listening with a cultural image of creative production, running independently of any user’s hand as a way to reestablish and remix the actual practice of Lucier’s original work, substituting the circular turning of record players for the artist’s microphone recording loop. 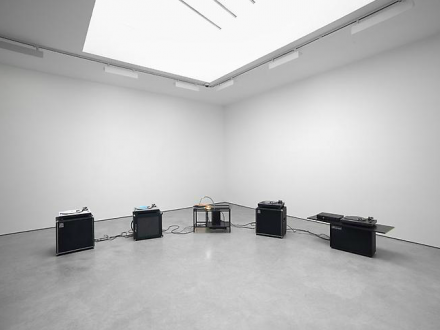 Mirza’s show also includes several collaborations with acts Factory Floor and  Django Django, as well as a series of LED light works, further illustrating the artist’s diverse and nuanced practice that readdresses constructions of environment and percept.  Presenting the viewer with a new set of correlations and rules within his sonic and physical architectures, the artist welcomes new options, not only of experience, but of ways to see the world. 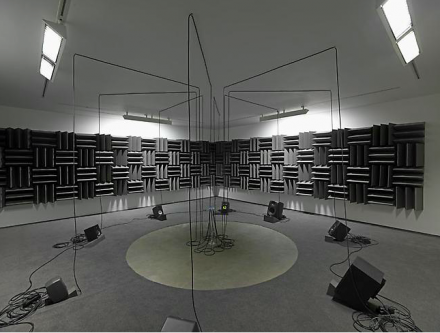 This entry was posted on Sunday, June 30th, 2013 at 12:45 pm and is filed under Art News. You can follow any responses to this entry through the RSS 2.0 feed. You can leave a response, or trackback from your own site.