David Zwirner is currently presenting an exhibition of German artist Blinky Palermo’s works on paper from the years 1976-1977, on view at the gallery’s 20th Street exhibition space in New York. The exhibition was organized by the Palermo archive to commemorate the 70th anniversary of the artist’s birth, and the selection of works on display are culled from both museum and private collections, made mostly in New York City where he lived from 1973-1976, shortly before his death in the Maldives in 1977.

Born Peter Schwarze in Leipzig, Germany and later adopted and raised under the name Peter Heisterkamp, Palermo chose to rename himself after the American boxing promoter Frank “Blinky” Palermo. He studied under Joseph Beuys in Düsseldorf and throughout his career was included in many exhibitions in Europe and the United States. While Palermo’s work is often associated with abstraction, Minimalism and Conceptual Art, these categories do not entirely capture the body of work the artist produced, which utilizes these thematic concerns to explore broader conceptions of language and communication across the visual palette. Palermo’s career, albeit short was influential in furthering the semiotic potential of art’s visual language, and his paintings, objects and installations explored how context affects the construction, exhibition and reception of art objects.

Palermo is known for his ability to create tension through strong contrasts, whether of color or material, figuration or abstraction. Often utilizing simple affects and devices, the works on display, like many of his paintings, are serial, reinforcing the importance of the context of their exhibition, and creating tension or release based on their correlation to the broader forms and flows of the works in sequence. For this show, the Museum of Modern Art has lent a seven part work,  1-7 Untitled (for Babette) that concentrates on the progression of geometric forms, and the artist’s meticulous brushwork. Another series, 1-12 12 Monate, is a set of 12 painted drawings that make abstract references to each month of the year. 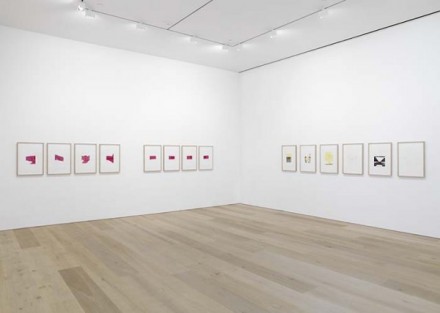 Of particular note is To The People of New York, a large scale piece comprised of 40 metal panels in tones of red, yellow and black- the same colors in the German flag. Showing his blend of associated identities between his German heritage and adopted home city, the artist infuses his own hand and persona much more thoroughly into his work, while still maintaining his peculiar approach to the presentation of color, context and series.  Palermo made this work shortly before his untimely death and, much like his other works on view, show his refined sense of using and composition. 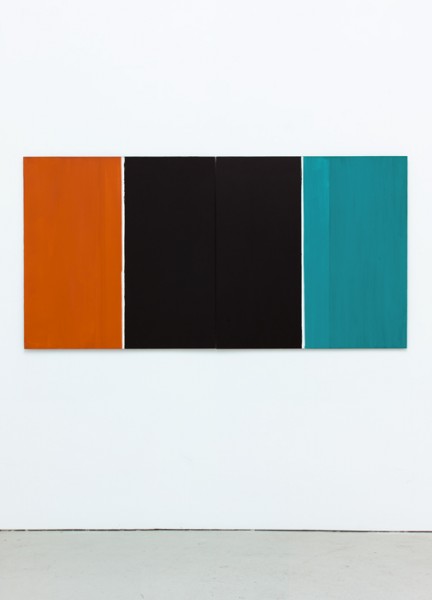 Palermo’s work was also recently celebrated in a traveling retrospective organized by the Dia Art Foundation, New York and the Center for Curatorial Studies at Bard College.  His current show of work closes on June 29th.

This entry was posted on Thursday, June 27th, 2013 at 11:21 am and is filed under Art News. You can follow any responses to this entry through the RSS 2.0 feed. You can leave a response, or trackback from your own site.