Moving beyond mere architectural details, The Museum of Modern Art’s current exhibition, Henri Labrouste: Structure Brought to Light,is not simply a survey of the French architect’s (1801-1875) work and influence, but also something of a meditation and retrospective on the library’s role in society.  As information continues its march from papers to servers, and books are routinely traded in digital form, Labrouste’s vision of the library as a central mechanism for the dissemination of knowledge offers an intriguing meditation on the significance, symbolism and vitality of the library today.  The show is also apropos here in New York as the city’s Central Public Library, in response to these changes, prepares for a potentially devastating renovation.

Under the direction of Barry Bergdoll, MoMA’s Philip Johnson Chief Curator of Architecture and Design, Corinne Bélier, of Paris’s Cité de l’Architecture & du Patrimoine and Marc Le Coeur, of the Bibliothèque Nationale de France, the show opened last October at the Cité de l’Architecture in Paris and came to MoMA in March.  Trading between architectural history, information theory and the shifting conceptions of public knowledge, the Labrouste retrospective welcomes a challenging and diversified look into the early modernist viewpoints of a rapidly industrializing society. 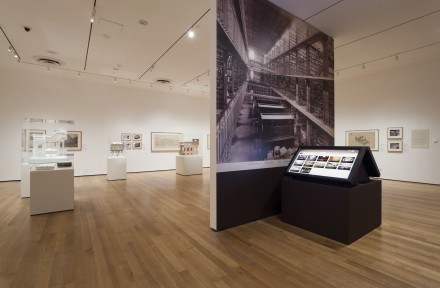 The entry gallery offers insight into Labrouste’s time in Italy during the 1820s. Plans and elevations from Classical Rome (Pantheon, Coliseum) are displayed alongside studies of Etruscan tombs, city gates (Perugia, 1825; Volterra, 1825; Citadel of Alastri, 1829) and Pompeii. The display reflects Labrouste’s deep curiosity in Italy’s complete architectural record—beyond the Renaissance and Classical periods—and indicates a keen interest in ceremonial and cultural spaces—gathering places and spiritual seats of community.  In his studies, space presented itself as a blend of public and private, facilitating exchange and dialogue in equal measure with contemplation and research. 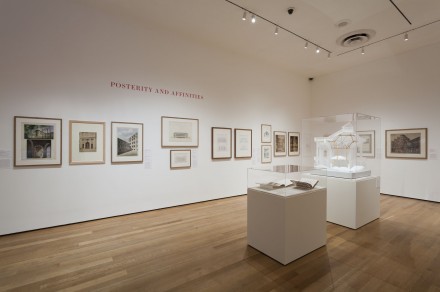 After returning to Paris, Italy continued to influence the architect.  Later in the show, the columns in the Bibliothèque Sainte Geneviève are mapped out in proportions seen before only in wall paintings in Pompeii—reflecting Labrouste’s romantic ideas of rediscovering and paying homage to the past as a means to designing and building the future, a fitting undertone for this bold historical survey.

The show’s centerpiece circulates around plans for two early modern libraries, the Sainte-Geneviève (1838 -1850) and the Bibliothèque Nationale de France (1859-1875) both widely regarded as Parisian masterpieces. With these libraries, Labrouste sought to bridge the gap between public and private space yet again.  The vast, arched reading rooms were architecturally novel in their use of structural cast iron in the stacks and trusses, but they also place unprecedented emphasis on the library, not only as a home for books, but also for the learning and engagement they offer the reader, as well as the value offered to the reader in an enlightened society. 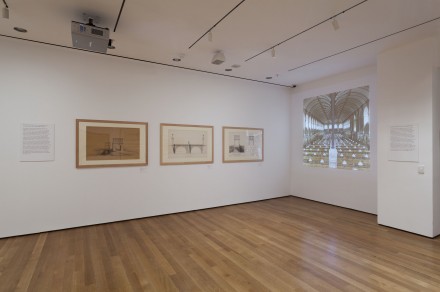 The curatorial team paid loving attention to Labrouste’s infatuation with detail—the Sainte Geneviève gallery holds drawings of a bronze door (1849), decorative motifs (1849), and bookcases (1848), while the Nationale’s space treats viewers to exquisite, geometric renderings of the building’s roof structure and heating radiator, among other treasures, in drawings whose dates are lost to history.

The third gallery emphasizes Labrouste’s impact on modern architecture from the Beaux-Arts period onward, with drawings by Charles LeCoeur, Julien Guadet, Johannes Hermanus Leliman. Near the exit of the third gallery is a photograph of New York’s Lenox Library on 70th Street, an early beaux-arts jewel demolished in 1912 to make way for the Frick mansion. Lenox’s books became part of the founding collection of the New York Public Library, which now faces an uncertain future itself as its bureaucrats wrestle to keep it relevant and financially viable for generations to come. 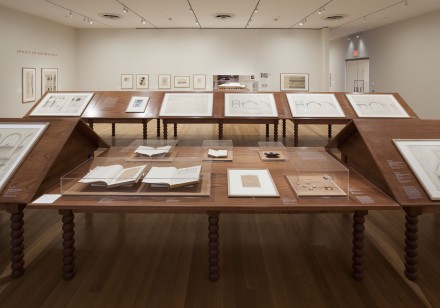 Tracing a fascinating and concise history of architectural space and information organization, Labrouste’s show at MoMA places his theories and vision into a modern context, illustrating the important considerations for space, storage and organization that dictates the functionality and aesthetic appeal of the library, even moving into a digital era.  The show is on view through June 24.

This entry was posted on Wednesday, June 12th, 2013 at 12:46 pm and is filed under Art News. You can follow any responses to this entry through the RSS 2.0 feed. You can leave a response, or trackback from your own site.