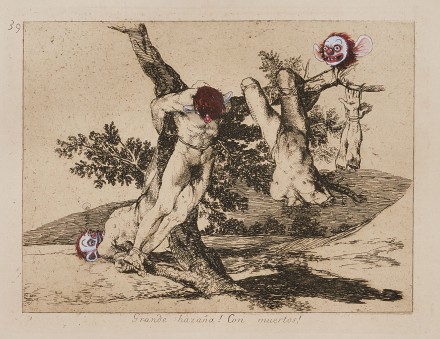 Jake and Dinos Chapman, Great deeds – against the dead!, (2003), via Yoshii Gallery

From May 1st until June 29th the Yoshii Gallery, New York is exhibiting a series of works entitled Insult to Injury by Jake and Dinos Chapman. For Insult to Injury, the artists reworked Francisco de Goya’s The Disasters of War, a set of 80 etchings, by changing all the visible faces of victims to heads of clowns and puppies. 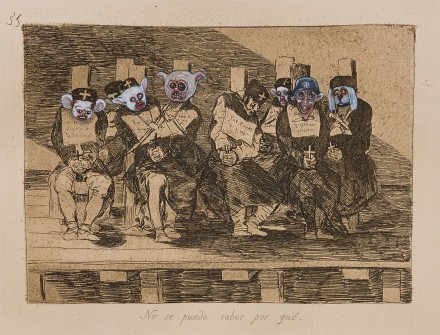 Jake and Dinos Chapman, Nobody Knows Why, (2003), via Yoshii Gallery

The Chapman brothers obtained one of the few remaining sets of the Disasters of War prints in 2001, produced directly from Goya’s original plates in 1937. “We had it sitting around for a couple of years, every so often taking it out and having a look at it,” stated Dinos, until they were certain what they intended to do. “We always had the intention of ‘rectifying’ it… So we’ve gone very systematically through the entire 80 etchings, and changed all the visible victims’ heads.” The Chapman brothers have had an ongoing fascination with Goya. In an early work, Great Deeds Against the Dead, they reinterpreted a Goya image by impaling a dismembered mannequin on a tree. The series was included in their contribution to the Turner Prize in 2003, alongside Sex and Death. The brothers lost out on the prize to Grayson Perry. 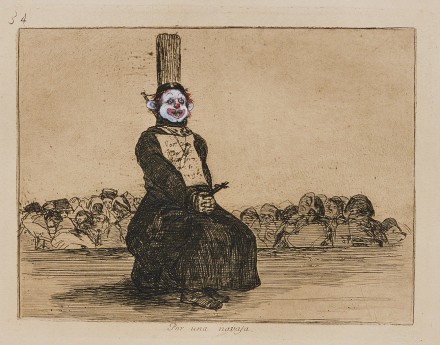 Jake and Dinos Chapman, On Account of a Knife, (2003), via Yoshii Gallery

Goya’s original etchings were considered too controversial and unpatriotic to be shown in Goya’s lifetime. As such they were first released to the public posthumously, in 1863. The Chapman Brothers’ work also created a lot of debate. In protest of the series, Aaron Barschak threw red paint over Jake Chapman at the talk he was giving in May 2003. Multiple critics questioned whether the process was an act of vandalism, the defacing of artistic treasures. Robert Hughes, an art critic who published a book on Goya in 2003, argued that Goya “will obviously survive these twerps, whose names will be forgotten a few years from now.” 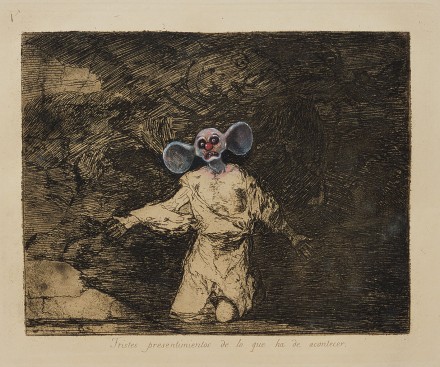 Jake and Dinos Chapman, Sad Presentiments of What Must Come to Pass, (2003), via Yoshii Gallery

However, the artists maintained that they did not destroy Goya’s etchings, but instead provided a new interpretation of them. The clowns’ and puppies’ heads are gruesome and disturbing, they conjure images of deranged nightmares. As such, they succeed in enhancing the atrocities conveyed by Goya, making them all the more disturbing. 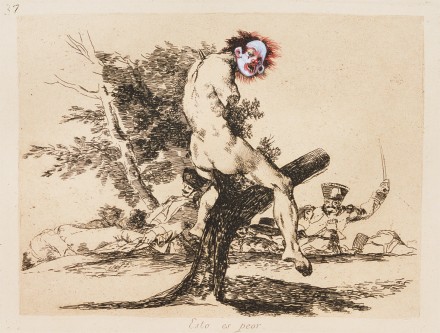 Jake and Dinos Chapman, This is Worse, (2003), via Yoshii Gallery

Jake Chapman was born in 1966 and Dinos Chapman in 1962. Both of the brothers graduated from the Royal College of Art in 1990 and currently live and work in London. The exhibition marks the first time the reworked etchings will be presented in the United States. Moreover, it is the first show that the Chapman Brothers have had with the Yoshii Gallery. 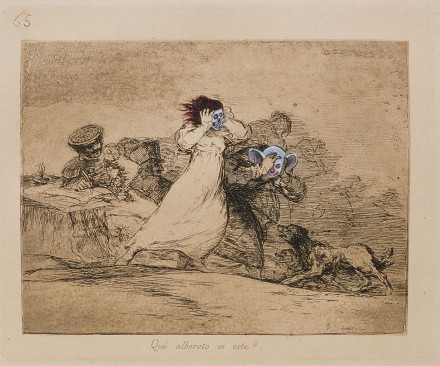 Jake and Dinos Chapman, What is this Hubbub?, (2003), via Yoshii Gallery

This entry was posted on Friday, June 28th, 2013 at 6:22 pm and is filed under Art News. You can follow any responses to this entry through the RSS 2.0 feed. You can leave a response, or trackback from your own site.