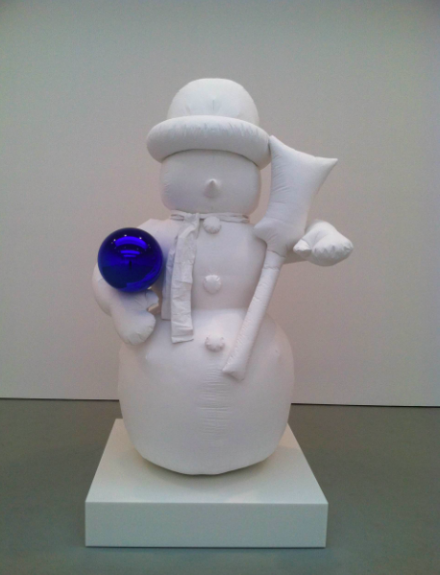 The counterpoint to Gagosian Gallery’s survey of recent work by Jeff Koons, David Zwirner is currently presenting a markedly more subdued set of works by the American artist.  Consisting of a cohesive series of plaster and steel sculptures, Gazing Ball fuses Koons’ signature approach to American kitsch and the art historical with a new sense of minimalism. 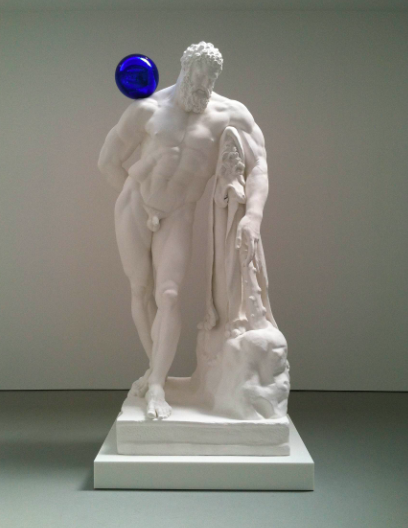 Throughout the four rooms open for Koons’ show, the artist once again explores the classic tropes of the American banal, as well as the iconic images of classical Greek and Roman art works.  Passing through the galleries on 19th Street, viewers are greeted with a series of mailboxes (one of which has been inexplicably fused with a hot rod engine) protruding from plastic buckets, towering sculptures of Hercules and Zeus, snow globes, Centaurs, and even an enormous inflatable snowman, all rendered in a milky white plaster that perfectly mimics the forms Koons has chosen.  Atop each of these sculptures sits a polished blue orb, made of glass, that reflects the work and its surroundings from within its murky hue. 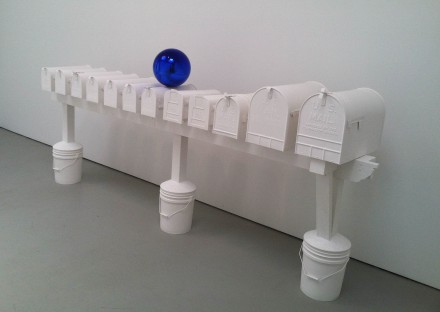 Distilling his signature reflective surfaces down to their essence, Koons performs an intriguing transformation within his own work.  His sculptural forms, pulled from the broader cultural milieu, are marked only superficially by Koons’ hand, a slight inflection that does little to command the same spectacular impression his steel coated venus sculptures do.  Instead, we are presented with a look at both Koons and the object itself, with the rift between the two more verbally emphasized.  The blue orbs, despite their connection to the sculpture, present a reflection of both the viewer and the plaster works, showing all three aspects locked into a set of interrelation.  The viewer is able to mark their reaction to the work itself, while seeing themselves incorporated into the changing face of the total piece. 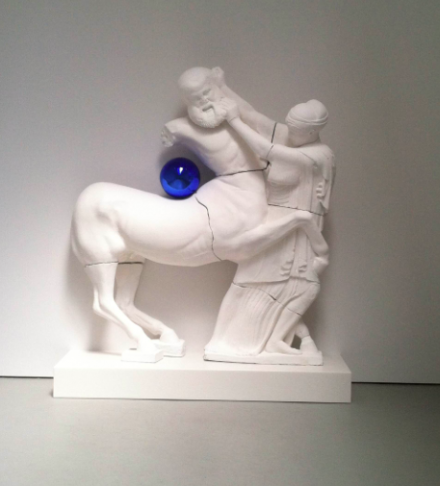 What’s more, Koons’ glass elements open new readings on his view of his own role in the work.  Moving around each work, the viewer can watch the sculptures bend in the changing angles of blue glass.  In his towering rendition of a Hercules sculpture, the reflected angles of the subject’s head and neck even create the illusion that the sculpture is staring back at the viewer.  From these pieces, the viewer is made presciently aware of their act of viewing, and Koons’ acknowledgement of that interaction.  The historical and social elements of the work then, move beyond the exclusive property of Koons, placed outside himself in an effort to let the broader implications of his subject matter take the forefront, rather than what he himself did to it. 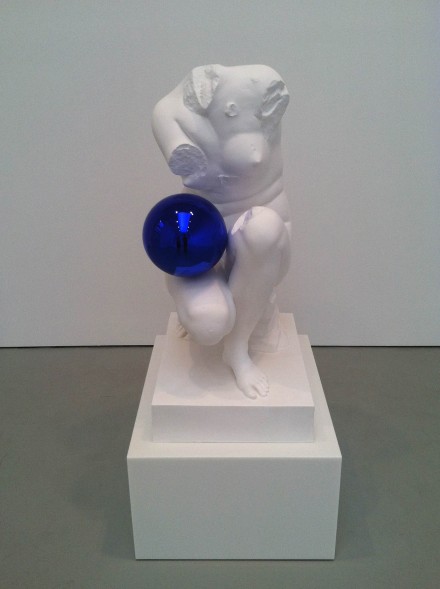 A marked departure from Koons’ colorful, often cartoonish work, the artist takes great strides in illuminating the gallery-goer’s role in his work, drawing them deeper into a markedly geometric system of optical interplays and reflections.  Playing at this interlocked relationship of viewer and viewed, the Gazing Ball series is a remarkable entry of new works by an artist playing at the dichotomies that have defined his work for decades. Here, by taking a step back from his own role in the work, Koons allows his art to take a major step forward in its complexity, message, and delivery. 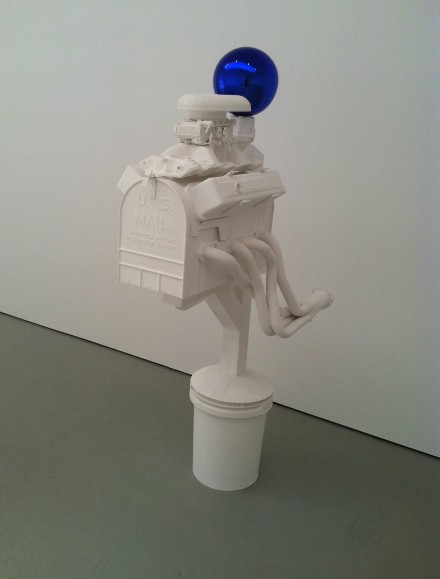 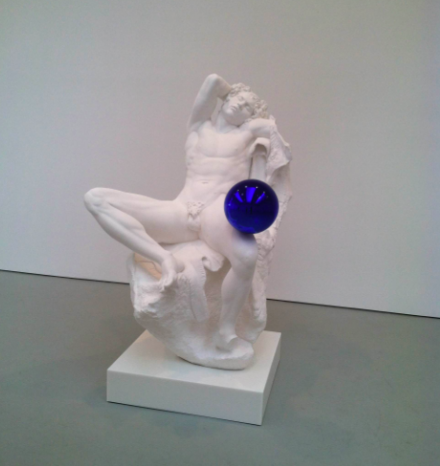 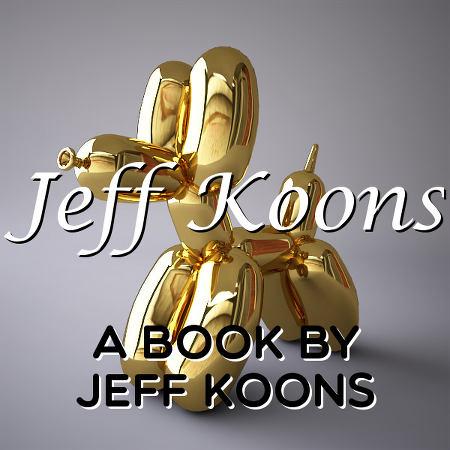 This entry was posted on Friday, June 28th, 2013 at 12:02 pm and is filed under Art News. You can follow any responses to this entry through the RSS 2.0 feed. You can leave a response, or trackback from your own site.