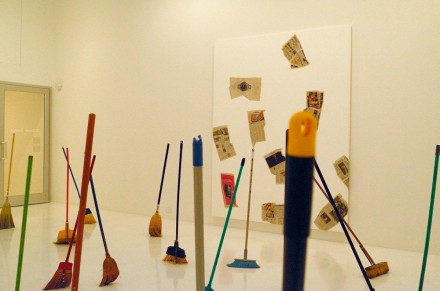 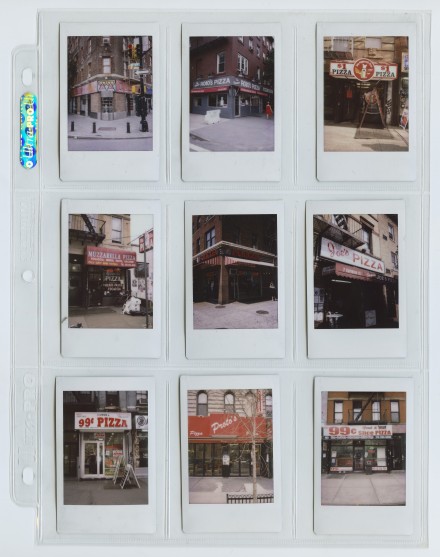 Upon entering the storefront gallery space, viewers are met with polaroids of public property such as fire hydrants, trashcans, mailboxes, park signs, and lamp posts. These objects are the subject of everyday interactions, often fading into the background of the city.  These are displayed in collections of nine, wrapped in the protective plastic of baseball card sleeves. The viewer is twice removed from contact with these ubiquitous objects by the sleeves as well as the glass frames, a display that provides both the reverence of collectibles and a scientific preservation.  This cataloging of New York’s public structures locks it away, abstracted from its daily use by multiple layers of protective casing. 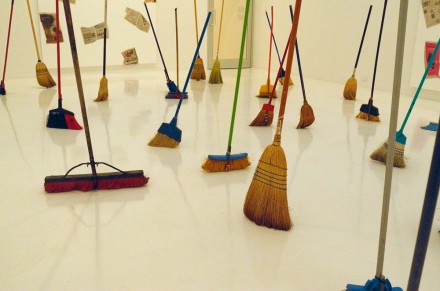 Joined together by exhibition, the generic objects take on a life of their own, animated by the graffiti and daily use of the denizens on their respective blocks.  Sheets containing footprints in the slush of wintery sidewalks or late-night pizza parlors provide a strong sense of the public’s interaction with these spaces despite the fact that the series is devoid of any human subject. 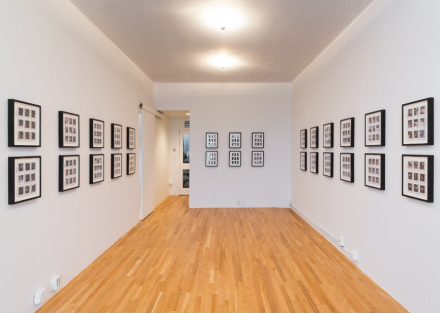 The exhibition continues in the Main Gallery with ‘Forty Days and Forty Nights’ – an installation of brooms that Smith and his friends found on the streets of the city. The brooms are presented mid-sweep as a dance floor of dynamic strokes. An anthropomorphized army intent on sanitation despite its own grime, which is clearly seen in the brooms’ splayed bristled.  Surrounding this installation are crumpled newspapers glued to canvas boards, hung at the cardinal points of the room. These draw the eye out of the jungle of brooms, making the viewer feel that they too might be swept up into the weightless pages. 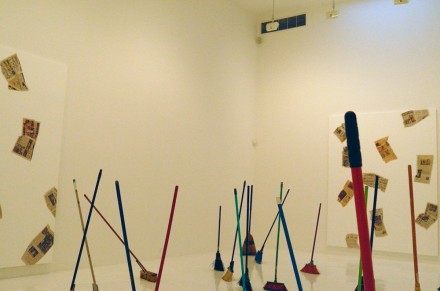 The newspapers are wrinkled and folded, discarded like trash, yet expertly applied to the canvas so that their creases have no volume and their articles are still legible.  The heightened two-dimensionality transcends the pages and speaks to their content, reinforced by Smith’s humorous titles such as Rhys watched Ross switch his Irish wristwatch for a Swiss wristwatch / Four furious friends fought for the phone or You know New York. You need New York. You know you need unique New York. 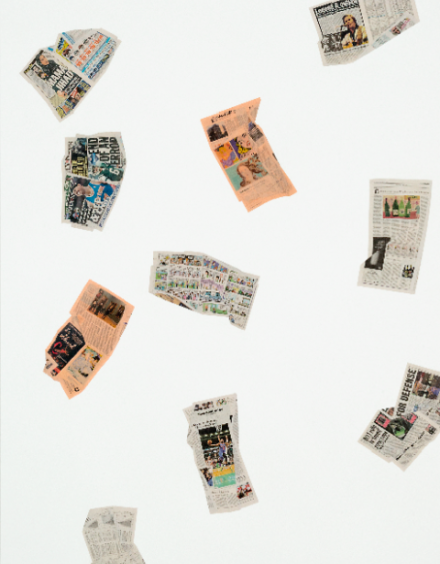 The subject of A Clean Sweep is the transformation and gentrification of downtown New York during Mayor Giuliani’s term, a time when street-corner culture was gradually replaced with trashcans and mechanisms for public safety. The lifestyle of the residents in these neighborhoods still leaves a mark on the surface of these objects, but is slowly fading from memory.  The installation of brooms acts as a positive sculptural counterpoint to the protected polaroids. 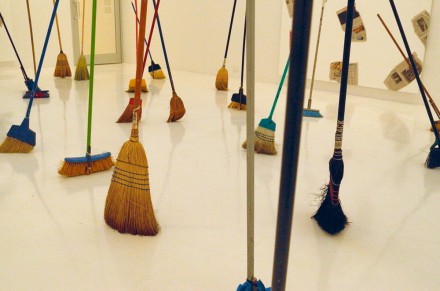 While the first room of the exhibition is static and nostalgic, the second may be a call to action. Smith perhaps asks for us to take up the brooms, not to clean the streets, but rather, our media.  A Clean Sweep could suggests that the sanitation of Downtown New York is also erasing its residents. It has proverbially thrown out the baby with the bathwater. The show closes on June 29th.

This entry was posted on Saturday, June 22nd, 2013 at 1:04 pm and is filed under Art News. You can follow any responses to this entry through the RSS 2.0 feed. You can leave a response, or trackback from your own site.